He was also announced last weekend to lead the Caribbean side to the ICC World Cup 2015 which bowls off next month in Australia and New Zealand. “He’s somebody we have a lot of time for, a lot of respect for, he’s somebody who is very mature for his age and I expect him to lead very well in the World Cup,” Cameron said in a radio interview here Monday.

Holder has played just three Tests and 21 One-Day Internationals, after making his international debut two years ago in Australia. He has since taken 29 wickets in ODIs and was good enough to hit a half-century on Test debut against New Zealand last June in his hometown Barbados. Cameron said he had been especially impressed with Holder in recent outings on the South Africa tour.

“I expect that we will give a good performance as a team. If you look at our new captain, he has done very well in the last couple of matches,” the Jamaican said. “As the matter of fact, he has been one of our better bowlers in the Test (matches) and the first T20 that was played so I expect him to lead from the front.” The West Indies face the Proteas in the first ODI in Durban Friday. 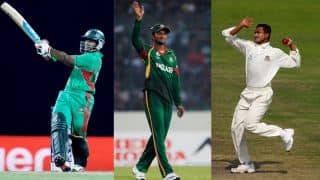