We didn't bowl as well as I thought we should. We were a little inconsistent with our lines and lengths. We leaked boundaries." - Jason Holder

Before heading into the ODI series against England, West Indies needed at least a 4-0 win against England to enter the confirmed list for 2019 World Cup. However, Jonny Bairstow s maiden ODI century denied them. This benefitted Sri Lanka, who have taken the No. 8 slot in the ODI rankings.

Jason Holder slammed West Indies for showing carelessness against England. However, he wants the side to get better in the remaining games and keep the lost opportunity aside. The series isn’t over – it’s just one game down. We’ve got to focus on this series first.

He also slammed the bowlers for conceding too many runs, allowing Bairstow and Joe Root s partnership to flourish, We didn’t bowl as well as I thought we should. We were a little inconsistent with our lines and lengths. We leaked boundaries, Holder told Sky Sports.

Although Chris Gayle provided a blistering start, the remaining batsmen failed to capitalise on the same. Marlon Samuels managed to score just 46-ball 17, If you’re not getting boundaries, you need to rotate the strike. In the middle we got a little stuck. It’s an area we really need to improve on in terms of rotating the strike. It’s been an area of concern for a while now. We are a naturally boundary-hitting team but if the boundaries aren’t coming, we need to find another option, Holder added.

Morgan, on the other hand, described Bairstow s innings as absolutely outstanding . He also praised his bowlers on counterattacking the Gayle storm after West Indies had reached 45 for no loss by the sixth over, I thought we came back really well. It didn’t take us that long to adapt to conditions. We went to slower balls and variations and hard in to the wicket which normally works here. The bowling unit in general put in a really good benchmark for the start of the series. Normally a performance like that is a reaction, so it’s encouraging to start the series like this. 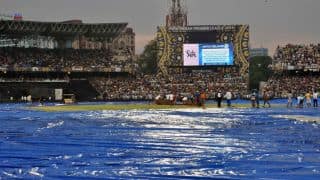