Currently, West Indies are 1175 for the loss of eight wickets in 42.5 overs with Jason Holder on 51.

West Indies skipper, Jason Holder scored his second half-century in ODIs against defending champions, India in their Pool B encounter, match 28 of the ICC Cricket World Cup 2015 at the WACA ground in Perth on Friday. His fifty came off 56 deliveries including three fours and three sixes along with a strike-rate of 89.30. Currently, West Indies are 175 for the loss of eight wickets in 42.5 overs with Jason Holder on 51 and Jerome Taylor on four. Live Updates: India vs West Indies 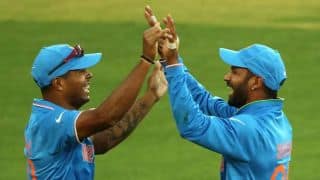