Currently, New Zealand are 75 for no loss in seven overs against New Zealand in 1st semi-final of T20 World Cup 2016.

England opener Jason Roy scored his maiden half-century in Twenty20 International (T20I) cricket, against New Zealand in the 1st semi-final on the ongoing ICC World T20 2016 at the Ferozshah Kotla Stadium in Delhi on Wednesday. His fifty came off 26 deliveries, including nine boundaries and a six, along with a strike rate of 196. He has been off to an explosive start, and is well on a mission to see England home to the final for the second time in the history, while the Kiwi bowlers struggle. Currently, New Zealand are 75 for no loss in seven overs, with openers Jason Roy and Alex Hales on 55 and 18, respectively. LIVE CRICKET SCORECARD: England vs New Zealand , Live Score, 1st Semi-Final match, ICC T20 World Cup 2016

Earlier, England skipper Eoin Morgan won the toss and have elected to bowl first, as New Zealand finished on a challenging total of 153 for the loss of eight wickets, courtesy of Colin Munro’s 46. England decided to move in with an unchanged squad, while New Zealand skipper Kane Williamson made a couple of changes in the side, with opener Martin Guptill coming back to replace Henry Nichols, while Adam Milne comes in place of Nathan McCullum. LIVE CRICKET UPDATES: England vs New Zealand , Live Score, 1st Semi-Final match, ICC T20 World Cup 2016 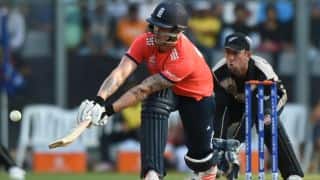