Mumbai (PTI) Learning to bat under pressure with the full-throated crowd supporting the opposition is one key element he has learned by playing in last year’s World T20 in India and in the Big Bash League in Australia, feels England’s limited over opener Jason Roy. Roy and opening partner Alex Hales put on 95 runs for the first wicket for the visitors in yesterday’s first practice game against India A to lay the foundation of the three-wicket victory at the Brabourne Stadium that was packed as it was India’s most successful skipper Mahendra Singh Dhoni’s last as captain.

“With regards to crowd and pressure situation in the sub-continent, with two spinners bowling in the middle overs and pressure seems to be getting on top, you need to calm yourselves down. Tournaments like the World T20 held here and the Big Bash (League in Australia) help in that,” said Roy here.

“The atmosphere was outstanding, it got the boys going. I think the boys enjoyed, with the crowd like it was. Boys bowling to Dhoni gave us great practice. It was awesome,” said Roy who scored 62.

“It’s an incredible position for him to be, as India’s most successful captain and a hero for India and the world. But we worried about ourselves and did not pay too much attention to what was going on around,” said Roy when asked whether the crowd support to Dhoni affected his team. While pleased with the way he had started the tour with a half century, Roy felt they needed to be converted into triple digit innings for the team to win.

Roy has teamed up with Hales after a while and welcomed the renewal of their opening partnership. “It’s good fun with him back. We enjoy batting together. We get on really well on and off the field. We know each other’s game well. We push each other; it’s a very good relationship.”

Roy said he wanted to be part of the Indian Premier League. “IPL on the same wavelength of Big Bash and I would like to be part of it,” he said. 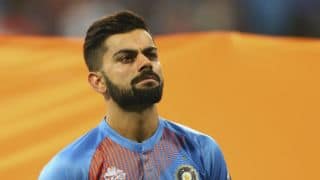