India couldn't have hoped for a worst start to a long South African sojourn, but pacer Jasprit Bumrah today asserted that if one debacle dents the team's confidence then it "does not deserve" to be play Test cricket.

India couldn’t have hoped for a worst start to a long South African sojourn, but pacer Jasprit Bumrah asserted that if one debacle dents the team’s confidence then it “does not deserve” to be play Test cricket. South Africa outplayed India by 72 runs inside four days in the opening Test in Cape Town to claim a 1-0 lead in the three-match series. The second Test is scheduled to start on Saturday.

“Confidence is not dented after one match. If it happens, then you don’t deserve to play. Learn from the mistake you made and go forward. There is not a single cricketer who has not made a mistake,” asserted Bumrah, who took four wickets in the match.

“It was a first good Test and a good learning experience for me because I have never played over here in South Africa. So I had a lot of things to learn from it. Now it is time to move forward and focus on the second Test,” Bumrah said on Thursday.

Bumrah said he would rather pick the positives, including getting A B de Villiers as his first Test wicket.

“It was not a dream debut. I was happy with whatever I learnt from that match. As a bowler you look to get the first wicket early and I got AB de Villiers. It was a happy moment, and from there on, we took a lot more wickets. As a bowler, my motto is not to get too excited and not to get too down after every match. I want to take confidence in to the next match,” he added.

Bumrah had a mixed first outing at Newlands. He was taken for runs in the first innings at a time when India needed to keep South Africa quiet, but roared back to form in the second innings and triggered the hosts’ 8-65 collapse on day four. He outlined the differentiation in his performance was down to understanding the nature of the pitches here.

“It’s always challenging whenever you come to a new country. The wickets are different and the weather is different. So it’s always good to face new challenges. As you play more and more, you get to know a lot about the wickets.

“You get a fair idea about where to bowl and what kind of lines to bowl. It’s been good so far. I am still learning and hopefully in the further matches, I will be able to do better,” said Bumrah.

Bumrah said he prefers to not have any notions about the surfaces he bowls on. He also acknowledged that Indian bowlers erred in reading the bounce in the South African first innings, which yielded 286 runs for the hosts.

“We realised what mistakes we made in the first innings, so (on day four) we were trying to create pressure from both ends and focus on our lengths which were wrong in the first innings. We just tried to correct them and not overdo things because over here when there is help from the wicket, you try to do extra but that won’t help. So we were just trying to be disciplined and stick to basics,” he said.

When asked about the moment he was made aware of his Test debut, Bumrah said, “There was a general discussion that I would play the match. So I started talking to our bowling coach what kind of things I should do, what kind of wickets are over here and what should I expect.”

The Gujarat pacer said he was not nervous when his debut cap was handed to him.

“It’s not like I was playing a first First-Class game in my life. I have played a lot of four-day games. So my basic plan was to go inside, get a feel of the wicket and make changes accordingly.”

Bumrah has spent a lot of time with bowling coach Bharat Arun even in the junior days and he highlighted the inputs he has received.

“He has seen me since the time I walked in as an Under-19 boy at the NCA where he was the coach. He knows me and gives me good advice. He knows my bowling and as a player it is good to have a coach who knows my strengths and weakness,” he said.

The second Test begins at Supersport Park on Saturday.

Smarting from their loss, the Indian team held a full-fledged practice session here on Thursday, lasting just under four hours. 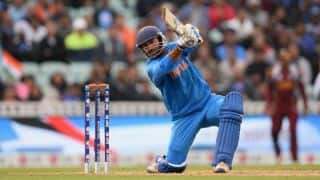 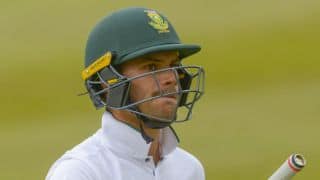