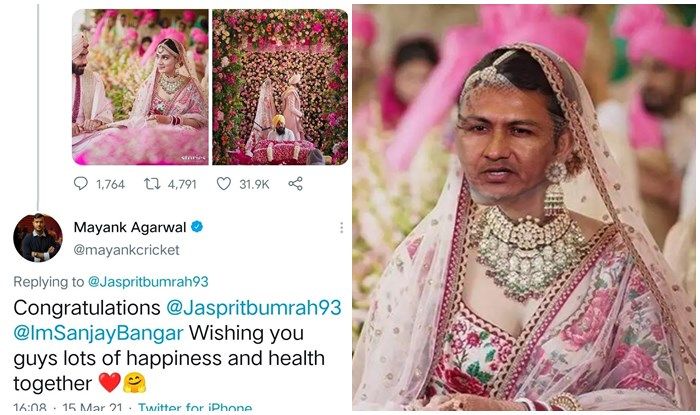 In what can be termed as a ‘goof-up’, India cricketer Mayank Agarwal – while congratulating the newlyweds – tagged ex-cricketer Sanjay Bangar instead of Jasprit Bumrah’s wife – sports presenter Sanjana Ganesan. And as expected, netizens were quick to spot it, and then they took screenshots and reacted. Mayank would have realized the goof-up.

The Karnataka batsman did it while reacting to his teammate Jasprit Bumrah’s Twitter post – which was the first post marriage. Surely, it was not intentional but Twitterverse seems to be having laughter at Mayank’s expense.

Here is how netizens reacted:

Mayank would be seen playing for Kings XI Punjab in the upcoming season of the Indian Premier League. He was one of the top run-getters in IPL in UAE. He along with KXIP skipper KL Rahul was in front in the race for the orange cap for a large part of the season.

On the other hand, reports had suggested that Bumrah and Sanjana had invited only 20 guests to the ceremony and mobile phones were prohibited at the venue. The couple has been successful in keeping things under the wraps during the pandemic.

Ever since the pacer opted out of the fourth and final Test against England at the Narendra Modi stadium – the rumours were doing the rounds.

Bumrah would in all probability be picked in the ODI series against England which would be followed by the Indian Premier League – where Bumrah would play a key role for defending champions Mumbai Indians. The upcoming edition of IPL starts on April 9 and the tournament opener will be played between Mumbai Indians and Royal Challengers Bangalore. 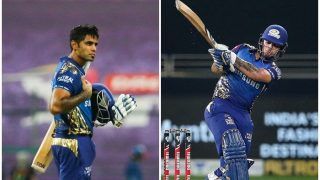 Mumbai Indians May Not Retain Ishan Kishan, Suryakumar Yadav in IPL 2022, Here's Why 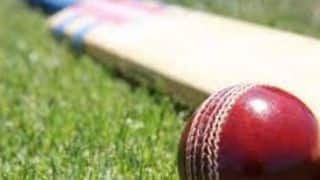