Jasprit Bumrah's excellent figures of 6/33 to bowl out Australia for 151 handed India a commanding position in the ongoing Melbourne Test.

It’s been a memorable first year of Test cricket for India‘s Jasprit Bumrah whose rise as the premier fast bowler continues. While he has already made a name for himself in limited-overs cricket, 2018 saw him making the longest format his own as well.

Since making his Test debut in January 2018, Bumrah has gone on to claim a five-wicket haul in South Africa, England and now Australia and thus became the first bowler from subcontinent to record five-wicket hauls in the aforementioned countries in the same year.

His excellent figures of 6/33 to bowl out Australia for 151 handed India a commanding position in the ongoing Melbourne Test.

Former Australia captain Michael Clarke has predicted the 25-year-old, who bowls with a unique run-up and action, will soon become the world’s best bowler.

“He (Bumrah) must be a great guy to play with and to captain,” Clarke was quoted as saying by Sydney Morning Herald. “He doesn t mind the pressure or the expectations. He wants to learn and is a workhorse – not too long before he will become the best bowler in the world.”

“When I was bowling there, the wicket had become really slow and the ball had become soft I tried to bowl a slower one, a fuller slow ball. Maybe it will dip or go to short cover. It worked because the ball had started reversing,” Bumrah said on Friday.

Bumrah said has always believed in his abilities and so isn’t surprised with the way his Test career has started. “I am not surprised. If I say I don t believe in myself, who else will? I just try to back myself in any situation that I go. Yes, the start has been good and I have played in England, South Africa and here three different kinds of conditions,” said Bumrah.

“Yes, I have not played a Test in India but whenever you go to different countries, you have new learning and experiences from playing in every country. I have had a good start and let s see how it goes further.” 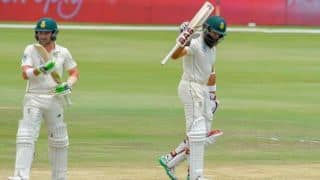 Current Test batsmen are the best Australia have got at the moment: Mark Waugh