India had taken an unassailable 2-0 win after their win in the second ODI against Zimbabwe.

Zimbabwe’s batting collapses once again to get bowled out for 123 in the third One-Day International (ODI) against India at Harare. Jasprit Bumrah led the charge for India this time as his four wickets knocked the stuffing put off the under-firing Zimbabwe team. Zimbabwe got off to a slow start and kept losing wickets at regular intervals. Hamilton Masakadza’s miserable run in the series continues as he was caught at the first slip of the bowling Dhawal Kulkarni in the early stages. Vusi Sibanda got a a major reprieve as Yuzvendra Chahal dropped a skier off the very first ball he faced. Chamu Chibhabha once again got off to a start but holed out in the deep to give Chahal his first wicket of the match.  LIVE CRICKET SCORECARD: India vs Zimbabwe 2016, 3rd ODI at Harare

Zimbabwe gave Timycem Maruma his first game of the series. He along with Sibanda were resurrecting Zimbabwe’s innings, but Sibanda played one back to Chahal for a slow-paced 38. Maruma too did not last long as his wickets were dislodged by Jasprit Bumrah for 17. Things went from bad to worse for Zimbabwe as they lost three more wickets off the next three deliveries to collapse to 104 for 7, which also included a needless run out. Bumrah, did not get a hat-trick, but got the wicket of Richmond Mutumbami to reduce Zimbabwe to 108 for 8 in the 35th over.  India vs Zimbabwe 2016, Live Cricket Updates, 3rd ODI at Harare

The last three batsmen had to bat out over 15 overs, which did not happen as India cleaned Zimbabwe in the 43rd over itself. Bumrah and Chahal were the pick of the bowlers with 4 and 2 wickets respectively. But Mumrah came back and removed Tawanda Mapuriwa for 1 to give him his fourth wicket of the match. It was just a matter of time before India removed the last man. Donald Tripano in the end became the second batsman to be run out.

Earlier, Zimbabwe had won the toss and elected to bat first. India handed out a debut to left-handed opening batsman Faiz Fazal, in place of Karun Nair, who scored 8 and 39 in the opening two matches respectively. Zimbabwe have made a lot of changes to their side, with the likes of Maruma, Donald Tripano, Neville Madziva and Tawanda Mapuriwa coming in. India have already clinched the series as they have taken an unassailable 2-0 lead following their win in the second ODI. 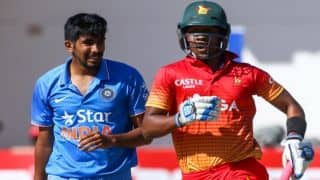