"Zaheer is a top class bowler. If he has the desire, resolve and the strength to deliver, he is an automatic choice."

Backing Zaheer Khan‘s inclusion in India’s squad for the 2015 World Cup, former India pacer Javagal Srinath on Tuesday said the left-armer is an “automatic choice” for the tournament and should be given a parting shot if the speedster shows the passion to play.

“Zaheer is a top class bowler. If he has the desire, resolve and the strength to deliver, he is an automatic choice. One needs to dig deep and see whether Zaheer has that kind of passion to continue and if wants 2015 as a parting shot then he should be allowed to do that,” said the ICC match referee on the sidelines of a Gillete Men of Steel Initiative event.

Srinath — the only Indian pacer to take 300 and more ODI wickets — was all praise for the current pack of paceman. “Mohammed Shami is a good bowler. Even Bhuvaneshwar Kumar is shaping up well. Ishant Sharma is looking to be back on track. He is bowling consistently well. He has shown tremendous improvement since his comeback a year ago,” said the former Karnatka State Cricket Association secretary.

Srinath, who represented India for over a decade since the early nineties, said that T20 is a batsman’s game but good bowlers will always make their presence felt. “For a fast bowler it is important to see success in all formats of the game. The problem is that fast bowlers struggle in the T20 format and that benefit has gone to the batsmen. The disappointment is evident on the faces of pacers these days,” said Srinath sharing the stage with Ventakesh Prasad and Ajit Wadekar.

Venky, as he is fondly called, cleaned up Sohail on the very next delivery after the left-hander had hit the Indian medium-pacer for a boundary and signalled to hit him one more time in the World Cup quarter-finals in Bangalore. “I had also said something to Aamir after he shot some verbal volleys against me. But it was the rattle of the stumps that made history and I not only won the battle but also dented Sohail’s career forever, said the former India bowling coach.

“It was also the turning point of Indo-Pak encounters. Earlier Pakistan always got the better of us but that incident and the win thereafter gave India the belief to win against their arch-rivals,” chuckled Prasad. 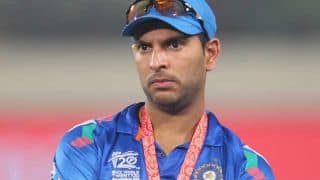