Javed Miandad pours his heart out praising skipper Shahid Afridi for his blistering knock against Bangladesh.

Javed Miandad retracted from his earlier statement on Shahid Afridi, praising him for the vintage quickfire innings against Bangladesh in Match No. 14 of the ongoing ICC World T20 2016. He considers this a positive sign for Pakistan and Afridi. Miandad believes that the skipper started his innings with a class shot, hitting fast bowler Mashrafe Mortaza for a four, sweeping him over fine leg connecting it in the middle. He went on and on saying that the premeditated shot set the tone for the innings and he knew where the field was. “That shot showed that he was confident”, he added. Shahid Afridi played a match winning innings of 49 off 19 balls against Bangladesh taking Pakistan to a massive total of 201 for 5 to beat Bangladesh by 55 runs. ALSO READ: Javed Miandad: Shahid Afridi should be ashamed of himself

On being asked if Pakistan can produce similar performance against India at Eden Gardens. Miandad tips the Pakistan batsman to watch the bowler closely more so their hands for the type of delivery, he is going to bowl and then select your shot and not just swing the bat for the sake of hitting. Miandad is affirmative on the fact that Shahid Afridi is in-form again and will be crucial against hosts in the next match said Miandad on the Aaj TV channel. He also praised the skipper on taking the responsibility and coming out to bat in the 14th over which was also the sign that he was confident. Shahid Afridi was adjudged man of the match in their opening match for his all round performance with both bat and ball.

But the whole episode of praising Shahid Afridi seems quite ironic, seeing the recent series of events where he named the skipper as shameless. Shahid Afridi said in a press conference that he is more loved by the Indian crowd than Pakistan on which Javed Miandad bashed him, saying that the captain should be ashamed of himself.

Miandad also agreed with the fact the anchor produced that Afridi could have knocked the ball for the single and completed the fastest T20 World Cup century by Pakistan. Instead he played selflessly for the team trying to hit the ball into the fence and getting out in the process.

ICC World T20 2016: Points table, most runs and most wickets 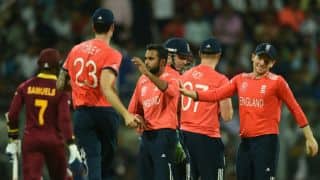