Jayant, off-spinner all rounder from Haryana got his ODI cap from former Indian cricketer Virender Sehwag.

During the fifth and deciding One-Day International (ODI) between India and New Zealand, Team India sported jerseys with their mother’s names printed on their back. This initiative was very much appreciated and served powerful statement towards the cause of women empowerment in India. This first came into notice just before the start of the ODI series when broadcasters came up with an interesting series of commercials. India’s three big players MS Dhoni, Virat Kohli and Ajinkya Rahane, were all in this commercial to acknowledge their moms. Following that commercial, team India did that similarly in the fifth ODI, which was also a big day for debutant Jayant Yadav.

Jayant, off-spinner all rounder from Haryana got his ODI cap from former Indian cricketer Virender Sehwag and made his way to the national side by replacing Hardik Pandya. As both Indian team walked out for national anthem, each player was seen spotted wearing their jersey with their mother’s names on their back but there was something different about Jayant, who would have wanted two names on his back. Jayant’s biological mother Lakshmi, whose name was on his jersey, died 17 years back in a plane crash and Jyoti Yadav, who is his second mother, raised him like her own child. It would have been quite special for Jayant as in his very first match for India, got the chance to wear his mother’s name on his jersey.

After the match, when Jayant was asked about this, he clarified that there might be some mix up with the names but it does not matter as his current mother Jyoti lives in her heart. It was surely a proud moment for both Jayant and both of his mothers.

Jayant also got one wicket of Corey Anderson in his debut match from his spell of four overs by conceding only eight runs. In the end, India won the fifth ODI by a huge margin of 190 runs. 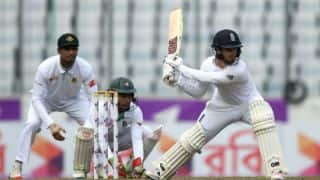