Jayasuriya to quit after England tour

Jayasuriya to quit after England tour

Veteran Sri Lankan opener Sanath Jayasuriya, who returned to the one-day and Twenty20 team after more than a year on Thursday, will draw curtains on his over two-decade long career after the upcoming series against England. 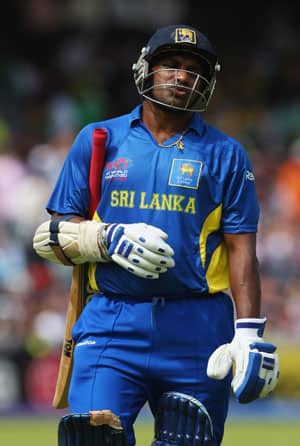 Veteran Sri Lankan opener Sanath Jayasuriya, who returned to the one-day and Twenty20 team after more than a year on Thursday, will draw curtains on his over two-decade long career after the upcoming series against England.

“I will retire after the England tour from all forms of the game,” said the veteran left hander, who will turn 42 on June 30.

Jayasuriya was picked to replace Upul Tharanga, who is facing disciplinary action for testing positive for a banned substance during the World Cup, in the 16-member squad which will play five one-day internationals and a single T20 international.

Jayasuriya, now a Member of Parliament for the ruling United People’s Freedom Alliance, was last seen in action in an ODI in India in 2009, which was abandoned due to a poor pitch, where he scored 31 runs.

He was overlooked for the World Cup which he claimed to be one of the biggest disappointments of his 22-year long international career.

Jayasuriya said he would play in the T20 game and one of the five one-day internationals starting from June 25.

“I do not want to be unfair on upcoming players by trying to play for too long. I will be available to them to share my experience,” said Jayasuriya.

Jayasuriya retired from Test cricket in 2007 with 6973 runs in 110 matches at an average of 40. His left-arm spin also came in handy for his team and he picked up 98 wickets.

The veteran was left out of the list of 20 players who were offered central contracts by Sri Lanka Cricket in 2010.

Though he was named in the provisional squad of 30 for the 2011 World Cup, he did not make it to the final 15.

The iconic batsman was a part of Sri Lanka’s 1996 World Cup winning side and was in fact instrumental in guiding the team to its maiden trophy.

Jayasuriya - Brought back from the wilderness to allow him to make a dignified exit?

Aamir did not play for us: Surrey cricket club