Sri Lankan Mahela Jayawardene hit a calculated unbeaten half-century as Delhi Daredevils thrashed Kings XI Punjab by five wickets to qualify for the knockout stage of the Indian Premier League, on Tuesday. With the five-wicket win on Tuesday, Delhi maintain their supremacy in the points table. 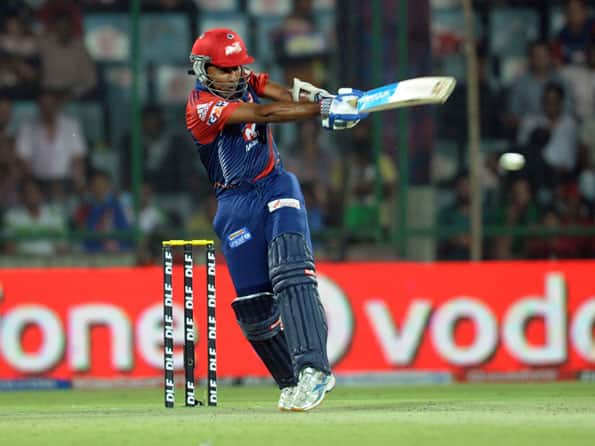 Sri Lankan Mahela Jayawardene hit a calculated unbeaten half-century as Delhi Daredevils thrashed Kings XI Punjab by five wickets to qualify for the knockout stage of the Indian Premier League, on Tuesday. With the five-wicket win on Tuesday, Delhi maintain their supremacy in the points table.

Courtesy Jayawardene’s unbeaten 56 off 49 balls, Daredevils managed to reach the target of 137 with an over to spare as they consolidated their position at the top of the table with 20 points and two matches left.

Delhi pace duo of Umesh Yadav (3/21) and Varun Aaron (2/19) had shared five wickets between to restrict Kings XI Punjab to manageable 136 for eight.

Barring skipper David Hussey (40 not out), it was a combination of poor shot selection and some disciplined effort by the hosts that enabled them to keep the score under check.

However, it was the 18th over from Awana where Pathan hit three boundaries to seal the issue. But it wouldn’t have been possible without Jayawardene who showed that matches can be won playing proper cricket shots.

This was after the Daredevils top-order failed once again as both Virender Sehwag (9) and David Warner (14) promised a lot of fireworks as 21 runs came off the first two overs.

Then Warner played a rank bad shot to be caught at gully by Azhar Mahmood off Praveen Kumar’s bowling.

Sehwag, who was dropped by Davis Hussey at mid-on off Praveen’s bowling however was gone in the very next over bowled by Parvinder Awana.

Awana, who bowled one of the best first spells of this edition with figures of 3-0-7-3 ran through the top-order. He bowled a fast and fuller delivery to Sehwag which hit his pads then clipped the off-bails.

Venugopal Rao (7) played away from his body to be caught behind while Ross Taylor (0) got a beauty that pitched on the middle-stump and moved a shade and was declared caught behind.

At 37 for four, Jayawardene and Ojha (34) joined hands resurrect the innings.

While the Lankan captain played the second fiddle, Ojha started taking on the bowlers as Awana was finished with his spell. He hit leggie Piyush Chawla for two straight sixes and then a couple of boundaries off Harmeet Singh to ease the pressure.

The duo added 58 runs for the fifth wicket when Chawla dismissed Ojha with a rank long hop which he failed to clear the fielder at deep mic-wicket.

In the Punjab innings, there were no significant partnership as Hussey was the only batsmen trying to take the attack back to the opposition camp but he needed to be complemented from the other side which unfortunately didn’t happen.

Shaun Marsh (13, 3×4) hit three boundaries in the region between cover and extra cover off part-time off-spinner Venugopal Rao who only managed to bowl half-trackers.

He survived a confident leg-before appeal off Morne Morkel’s bowling but was gone in the very next over bowled by Aaron.

The India international angled one into Marsh who tried to play it off his hips only for Naman Ojha to take a good catch down leg-side.

Mandeep Singh (21) hit a few streaky boundaries but the compulsive pull-shot player in him brought his downfall as he tried a horizontal bat shot off Aaron. He couldn’t get required elevation only to be smartly pouched by short mid-wicket by Sehwag.

Nitin Saini (15) also didn’t last long as Umesh Yadav sent him back into the dug-out. The ball pitched on the off-stump channel and moved a shade as the Haryana lad pushed at it. Sehwag took a low tumbling catch to make it 54 for three.

It didn’t take much time before it was 63 for four as David Miller backed too far from the non-striker?s end going for a non-existent single as Pawan Negi at mid-on made no mistake with all three stumps to aim at.

Skipper Hussey and Azhar Mahmood (9) tried to do a repair job. Mahmood dispatched a short ball from Umesh with a well-timed pull-shot.

However, Umesh made a good comeback in the next few deliveries as started bowling at fuller length. Mahmood tried to hoist him over long-off only to be holed out at the boundary ropes.

With half of the side gone for 80, it was always supposed to be an uphill task for Kings XI to post a big total.

Last match’s hero Gurkeerat Singh Ahluwalia (8) hit two boundaries but then a classical left-arm spinner’s delivery from Negi. He invited the batsman to come out for a drive and the ball spun away with Ojha whipping off the bails in a flash to make it 88 for six. (PTI)