Jeff Thomson, the former Australian legendary pace bowler feels the current bunch of Indian fast bowlers lack discipline. In his list, he also included the name of  Ishant Sharma, who was India’s main weapon during their recent 2-1 series win against Sri Lanka. Thomson was addressing the media on Monday. The Mumbai Cricket Association (MCA) recently roped in the Aussie great to train the 30 young and talented Mumbai bowlers ahead of the upcoming domestic season. Talking about the performances of Indian bowlers, Thomson said, “Indian bowlers lack discipline. The bowlers were not concentrating hard in Australia last time around [2014-15 series, which India lost 0-2]. You got to take wickets twice to win a Test match.” READ: Jeff Thomson to coach Mumbai bowlers ahead of 2015-16 domestic season

Thomson also criticised Ishant’s approach. “He lacks discipline. I first saw him long time back but he lost the plot. He looked injured on the Australian tour. He has good skills but needs to be reminded about… You know what. He needs a rocket, you know what I mean,” the former Aussie pacer said about Ishant. Thomson, who was known for his aggressive approach and fierce competitive attitude during his playing days, feels the aggressive attitude of the modern fast bowlers haven’t changed after the unfortunate death of Phillip Hughes. “I don’t think bowler have mellowed. It was just bad luck,” he explained.

Thomson, the 64-year-old, played 51 Tests and 50 One-Day Internationals (ODIs) for Australia and  has 255 wickets  to his name. Recently, he was signed for a two-year contract with MCA and has come to Mumbai to start his assignment. He will start training the bowlers Monday onwards. 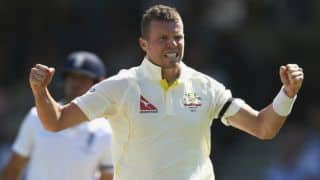