Shivnarine Chanderpaul went past Mahela Jayawardene as the seventh-highest run-scorer in all Test cricket.

West Indies went to lunch at 234 for six against England on Day Three of the first Test at Antigua. Shivnarine Chanderpaul was dismissed after adding another feather to his ever-growing cap. Chanderpaul was on the verge of going past Mahela Jayawardene as the seventh-highest run-scorer in all Test cricket. Chanderpaul achieved the landmark in excellent fashion, hitting back to back boundaries off Stokes. Live scorecard: England tour of West Indies 2015, 1st Test at Antigua

James Anderson started proceedings for England on Day Three, with Blackwood and Chanderpaul continuing from their overnight scores. He was batting as solidly as he ever has, but fell into a trap laid out by England, hitting James Tredwell to Ben Stokes at cover to get out for 46. At the other end Jermaine Blackwood decided that offence was the best way to go, scoring a good half-century after having gone into a shell last evening. Denesh Ramdin could only score nine before getting strangled down the leg side. Live Updates: England tour of West Indies 2015, 1st Test at Antigua Day Three

Earlier, Kraigg Brathwaite had anchored the innings on Day Two. After bowling England out for 399 Brathwaite and Devon Smith walked out to the middle in attempt to give West Indies a good start. However, Smith got out to the swing of Jimmy Anderson, which was pouched behind by Jos Buttler. READ: Shivnarine Chanderpaul goes past Mahela Jayawardene in list of leading Test run-scorers

Darren Bravo was the next man to walk to the middle however, he also lost his wicket nicking behind. This time the bowler was Chris Jordan who also got some amount of movement early on. However, both Samuels and Brathwaite were dismissed with the score on 99 before Blackwood and Chanderpaul dug in for a 93-run stand. 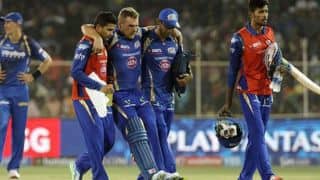