Blackwood steadied the ship first with Shivnarine Chanderpaul in a partnership that yielded 93 runs.

Jermaine Blackwood went on to complete a tremendous maiden Test century for West Indies against England in the first Test at Antigua. Coming in to bat at No. 6, Blackwood steadied the ship first with Shivnarine Chanderpaul — in a partnership that yielded 93 runs — and later with and then 35 with Denesh Ramdin, and 49 with Jason Holder. Blackwood decided that offence was the best way to go, scoring a good half-century after having gone into a shell last evening. Live scorecard: England tour of West Indies 2015, 1st Test at Antigua

Earlier, West Indies went to lunch at 234 for six against England on Day Three of the first Test at Antigua. Shivnarine Chanderpaul was dismissed after adding another feather to his ever-growing cap. Chanderpaul was on the verge of going past Mahela Jayawardene as the seventh-highest run-scorer in all Test cricket. Chanderpaul achieved the landmark in excellent fashion, hitting back to back boundaries off Stokes. Live Updates: England tour of West Indies 2015, 1st Test at Antigua Day Three 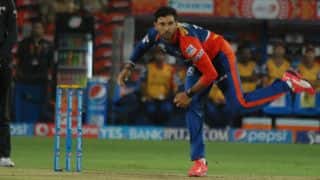