Wade was the second wicket to fall, before compiling the fastest century for Tasmania in domestic one-day cricket, reaching three figures off just 65 deliveries.

Tasmania s wicketkeeper batsman Matthew Wade hammered 117 off 74 balls a walked away with the Man-of-the-Match award in his team s 65-run win over Victoria in their opening match of the JLT One-Day Cup at the Riverway Stadium, Townsville on Wednesday.

The Australia international combined for a 170-run stand for the opening wicket in just 22.5 overs with Ben McDermott after Tasmania captain George Bailey opted to bat first.

McDermott made 56 off 69 balls falling to Will Sutherland. Tasmania s top-order fired with one down Jack Doran scoring 32 off 59 while No.4 Jordan Silk made 23. Wade was the second wicket to fall, before compiling the fastest century for Tasmania in domestic one-day cricket, reaching three figures off just 65 deliveries.

Skipper Bailey made 25 while No.6 Simon Milenko scored 30 off 20. Tasmania finished with 321 for eight in their 50 overs. For Victoria, Sutherland finished with two for 51 in his ten overs while Jackson Coleman and Tom O Connell too picked two wickets each. Chris Tremain returned one for 80 in his ten.

In reply, Victoria openers Marcus Harris and Seb Gotch made 72 for the opening wicket before Jackson Bird got rid of Gotch for 33. Victoria failed to stitch together any substantial partnerships with middle-order failing to capitalise on their starts. Cameron White was taken by Tom Rogers for 11 while skipper Peter Handscomb added 22, Glenn Maxwell made 21 and Nic Maddinson scored 32. Down the order O onnell contributed 22 as Victoria were bundled out for 256 in 47.2 overs. 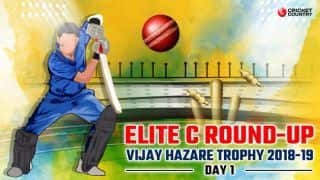 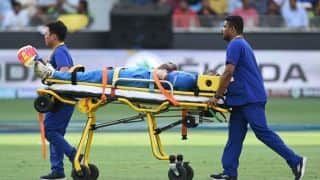