The 19-year-old scored his half-century in 23 balls, equalling the overall fourth-fastest fifty in the tournament's history.

At the age of 19, Queensland opener Max Bryant has become his state s fastest one-day half-centurion. The teenager hit his way to a fifty in 23 balls, eventually out for 71 from 31 with 68 runs coming in boundaries courtesy six sixes and eight fours during Queensland s JLT One-Day Cup fixture versus South Australia at Hurtsville Oval.

Bryant, who was part of the Australia Under-19 team that reached the final of the junior World Cup in January, thus equalled the fourth-fastest fifty in the One-Day Cup s history.

FIFTY! That’s the fastest EVER one-day half-century for the Bulls by young opener Max Bryant, off just 23 balls! And he’s only 19

Set a target of 281 to beat South Australia, Queensland were hurried to 106 before Bryant was dismissed by the legspin of Adam Zampa in the 11th over.

This is Bryant s ninth List A game. He won a contract with Queensland last year after representing the Cricket Australia XI in the One-Day Cup, where he made 168 runs in six innings. In the current competition he has scored 45, 36 and 71. 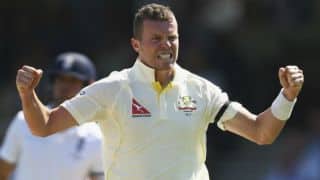 Australia have lacked a bit of leadership: Peter Siddle