England lost two early wickets on Day Four, which put their position in the ongoing third Test in a perilous position against India at Mohali.

England lost two early wickets on Day Four, which put their position in the ongoing third Test in a perilous position against India at Mohali. However, they have been kept afloat by Joe Root, who completed his 25th Test half-century. England, who resumed their second innings struggling at 78 for 4, slipped to 107 for 6 losing their key batsman Jos Buttler and nightwatchman Gareth Batty for cheap. Batty was the first man to be dismissed, in the second over of the day when Indian spinner Ravindra Jadeja trapped him in front of the wickets for a duck. England will be disappointed with their nightwatchman getting out early, having faced mere seven balls in his innings. England were 122 for 6 in 54 overs, with Root batting on 57 and Haseeb Hameed reaching 1 not out. England trail by 12 runs in the second innings. Live Cricket Scorecard: India vs England 3rd Test at Mohali

On the other hand, the right-handed wicketkeeper-batsman Buttler was dismissed for run-a-ball 18. Buttler danced down to hit Jayant Yadav over the ropes for runs, signalling that England could be taking the aggressive route. But Buttler found Jadeja manning the deep midwicket boundary, and the Indian fielder took a good catch to get rid of the English batsman who could be very dangerous with his explosive batting. Buttler s wicket brought Haseeb Hameed to the crease. The opening batsman did not come out to play at his usual position due to an injury to his little finger. LIVE CRICKET SCORES & UPDATES: India vs England 3rd Test, Day 4

Meanwhile, Root continued to gain some confidence and provide England the much-needed support. He completed his half-century in the second innings, which was certainly an effort from his end to make amends after a poor show in the first innings. 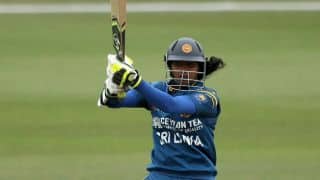