England skipper, Joe Root, has added yet another feather in his already diamond-studded cap. Playing for England in the second Test at Leeds against West Indies, Root equaled AB de Villiers record of scoring fifties in 12 successive Tests. Root scored his 31st half-century in 87 balls, his 3rd against West Indies. His first fifty in the series of 12 came against Bangladesh in October 2016. In between all the fifties, Root has three 100+ scores as well.

De Villiers’ tally included as many 6 hundreds including three in the second innings of a Test, while all of Root’s hundred have come in first innings of a match. The last player who was on the verge of equaling de Villiers record was Bangladesh s Mominul Haque. Root also went past the likes of Sir Vivian Richards, Gautam Gambhir and Virender Sehwag, who all have scored fifties in 11 successive Tests. Gambhir has the most number hundreds (7) amongst all these players.

Root along with Ben Stokes’ revived England’s gloomy innings after West Indies’ ransacked their top-order. From 71 for 4, the hosts are placed at 125 for 4 with the pair adding 57 runs for the fourth wicket. England lead the 3-Test series 1-0, after winning the first-ever day-night Test on British soil last week. 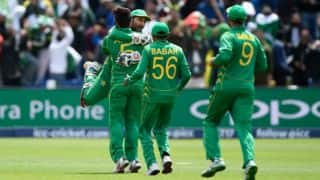 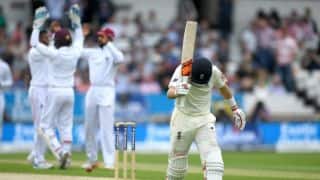