The only consolation for Root, who fell for three in the second innings of Yorkshire's County Championship clash away to arch-rivals Lancashire, was that he was caught behind off the bowling of England spearhead James Anderson

England captain Joe Root‘s hopes of spending valuable time in the middle batting against the red ball ahead of next week’s first Test against India were dealt another blow on Monday as he again fell cheaply in the Roses match.

The only consolation for Root, who fell for three in the second innings of Yorkshire’s County Championship clash away to arch-rivals Lancashire, was that he was caught behind off the bowling of England spearhead James Anderson on the second day of four at Old Trafford.

In a Roses match where bowlers have been on top, Adam Lyth had earlier fallen for four Kane Williamson, the New Zealand captain, out for just one as ex-England paceman Graham Onions struck twice.

Root had been the first of a trio of world-class batsmen involved in a hat-trick from Lancashire all-rounder Jordan Clark on Sunday when he was lbw for 22. Next ball Clark then had Williamson lbw for a duck before England wicket-keeper Jonny Bairstow was caught in the slips.

Yorkshire, the White Rose county, were dismissed for 109 but led on first innings as hosts Lancashire, whose emblem is the Red Rose, slumped to 102 all out in reply.

Monday saw Bairstow guide Yorkshire to 154 for four in their second innings at lunch, the in-form batsman 77 not out from just 63 balls at the interval as his side established an imposing lead of 237.

England begin a five-Test series with India at the Edgbaston ground in Birmingham on August 1. 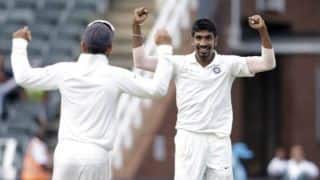