Joe Root is batting on 93 while Gary Ballance is on 59 at tea.

Joe Root and Gary Ballance dug in brilliantly to ensure that Australia took no wickets in the second session as England were firmly in command at 190 for 3 at tea. Root was closing in on yet another century, while Ballance was looking solid in his half-century after a shaky start. The duo, who came together at 43 for 3, have added 147 runs for the fourth wicket. Live Scorecard: England (ENG) vs Australia (AUS) Ashes 2015 1st Test at Cardiff, Day 1

Mitchell Starc and Mitchell Johnson were both wayward, each going at more than four runs per over. Josh Hazlewood and Nathan Lyon were tidy, and Shane Watson was steady without ever been probing. Brad Haddin would be ruing dropping Root when the latter was still on 0. Live Blog: England (ENG) vs Australia (AUS) Ashes 2015 1st Test at Cardiff, Day 1

Earlier, The Ashes 2015 took its time to begin after a few minutes delay due to rain and a prolonged opening ceremony. England won the all-important toss and Alastair Cook decided to bat first. After England suffered from early wickets to fall to 43 for 3, Root and Ballance added an unbroken 65 to take England to a relatively secure 88 for 3 at lunch. READ: Joe Root scores half-century in The Ashes 2015 1st Test at Cardiff 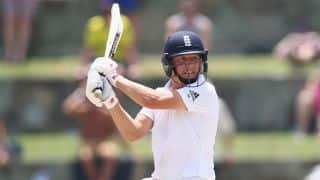