England Test captain Joe Root made an unbeaten 75 as Yorkshire comfortably chased down a meager target of 186.

Joe Root came out on top in every sense in his first county match against younger brother Billy as Yorkshire launched their One-Day Cup campaign with a seven-wicket win away to Nottinghamshire at Trent Bridge on Saturday. England Test captain Joe Root made an unbeaten 75 as Yorkshire comfortably chased down a meager target of 186 and he ended the match with more than 17 overs to spare by lofting part-time off-spinner Billy for six. Michael Vaughan feels Kevin Pietersen was right about IPL

The match also saw Joe Root in opposition to an England team-mate in Nottinghamshire paceman Stuart Broad. “Broady was giving me a bit of stick but that’s what you get from a top class bowler,” said Joe Root, appointed as England’s Test captain after long-serving skipper Alastair Cook resigned. “At the end it was difficult when I hit my brother for six — but the professional side took over,” added Root, whose 80-ball innings also included seven fours.

Earlier, Nottinghamshire were bowled out for a mere 185, with Billy Root managing just six against his native county before he was caught behind by England wicket-keeper Jonny Bairstow off Tim Bresnan. The ex-England paceman led Yorkshire’s attack with three for 22. Former Zimbabwe batsman Brendan Taylor top-scored for Nottinghamshire with 60 off 59 balls, including eight fours.

Riki Wessels, the son of former Australia and South Africa batsman Kepler, scored 41 while Michael Lumb, an ex-Yorkshire batsman whose father Richard opened for the White Rose, made 35 but there was little else for Nottinghamshire fans to cheer during the innings. 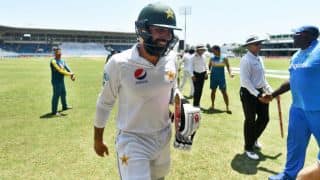 Pakistan vs West Indies: Misbah-ul-Haq warns his team of complacency ahead of 2nd Test