Joe Root and James Anderson have recorded the highest 10th-wicket partnership in Test history during the first Test at Trent Bridge between India and England on Saturday.

The previous highest 10th-wicket partnership was between Phil Hughes and Ashton Agar against England last summer during the first Ashes 2013 Test match. The duo had scored 163 runs, which saw debutant Agar also scoring a century.

Root completed his fourth century while, Anderson reached his first half-century. The last wicket was of Liam Plunkett and England were 298 for the loss of nine wickets at that point. 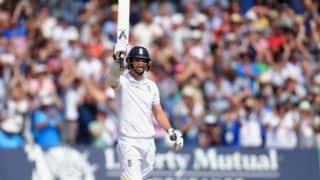