Ponting also went to say that Smith could have been invincible if he played in the era of Timeless Tests.

There is no doubt that Steven Smith is on a different level currently with his batting in the ongoing Ashes series. Smith slammed his second double-hundred on Saturday at Perth in the third Test against England. Mesmerised with his show, former Australia legend Ricky Ponting has called Smith as one of the best of this age-and-time.

Smith scored his 22nd Test hundred and second double-hundred of his career. He also brought up a thousand runs in 2017. He has now done it four consecutive times.

Speaking to cricket.com.au, Ponting said: You look at the other better players in the world; India s Virat Kohli is on a pretty high pedestal but then you look at Joe Root and Kane Williamson, as far as I m concerned those guys don t match up to Steven Smith and I ve said that for a long time.

He further went on to hand England an advice on how to get Smith out.

He added: I even had England players come to me this morning saying Just give us something on Smith. What are we going to bowl to Smith? And I said, Look, one, I m not going to tell you. And two, I don t know anyway because it seems like he s got every base covered .”

Ponting also went to say that Smith could have been invincible if he played in the era of Timeless Tests.

He said: You look at his wagon wheel, he s got boundaries almost all around the ground and there s no obvious weakness and with his appetite for runs that he s got he ll just keep batting forever. Imagine him back in the day when there were Timeless Tests he would ve just batted forever! 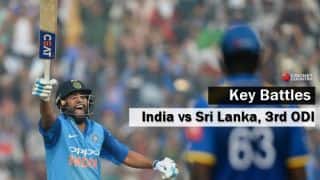