Joe Root brings up his fourth One-Day International (ODI) century off balls during in ICC World Cup against Sri Lanka, Pool A Match 22 at Wellington. He therefore becomes the youngest player to score a century for England in World Cups. Root has been in excellent form throughout this tournament and has finally delivered when his team needed it the most. Root was well supported by skipper Eoin Morgan, along with whom he put on over 50 runs for the fourth wicket. He has a good partnership going with James Taylor, who came in at No.6.  Live Blog: England vs Sri Lanka

Sri Lanka will will hope that England do not get too many runs in the final few over and try to restrict them to a reasonable score. They have good death bowling experts like Lasith Malinga, Suranga Lakmal and Thisara Perera. They will be entrusted to make sure that England do not run away with the game. Live Scorecard: England vs Sri Lanka

The wicket of Root is going to be key and his wicket will make a difference of about 15-20 runs to the eventual total. England will be especially delighted with this after they won the toss and elected to bat first. Both teams are coming into this game after posting huge victories in the previous game. ICC Cricket World Cup 2015: Pool-wise Team Standings 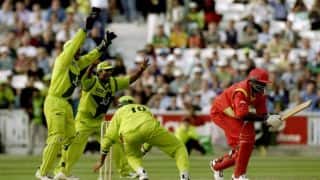