Joe Root and Ben Stokes put up a whirlwind partnership for the fifth wicket that took the game away from the South Africans.

Bad light brought a premature end to the second day of the ongoing third Test between South Africa and England at Johannesburg on Friday. England had reached a score of 238 for the loss of five wickets after 52.4 overs, with Joe Root (106 not out) having completed his ninth Test ton to lead the way. Root found valuable support in all-rounder Ben Stokes (58 off 54 balls), as the duo put on a whirlwind partnership for the fifth wicket that helped the visitors recover after a spate of wickets early in their innings. Stokes completed his sixth Test fifty with the typical aggression that he has displayed in the series so far. SCORECARD: South Africa vs England 2015-16, 3rd Test at Johannesburg, Day 2

England were off to a perilous start after bowling the hosts out for 313, with Alex Hales (1 off 10 balls) and Alastair Cook (18 off 27 balls) departing in quick fashion off the bowling of Kagiso Rabada and Hardus Viljoen. Cook edged a Viljoen delivery to the slips, where AB de Villiers held on to the catch to give the bowler his maiden international wicket in his very first delivery in international cricket. England looked shaky at 27 for two at lunch. UPDATES: South Africa vs England 2015-16, 3rd Test at Johannesburg, Day 2

Nick Compton (26 off 68 balls) helped them recover with a 52-run stand for the third wicket with Root in the second session, which was brought to a swift end by Rabada with an edge to the slips in a manner similar to that of Cook. Morne Morkel was the next to strike, with James Taylor perishing for 7 thanks to a brilliant leaping catch by Temba Bavuma at short-leg, with England’s score reading 91 for four.

England needed a recovery in the form of a partnership at that stage of the match, and it was left to Root and Stokes to deliver on that front. The duo barely wasted any time in cracking the balls towards the fence all over the ground, and the pressure of the situation soon got the better of the South African bowlers. The pair made merry for the rest of the second session, as they butchered the wayward bowlers mercilessly all over the park, with the hosts appearing to not have any game plan in their bowling whatsoever.

Root and Stokes soon brought up their half-centuries, with the latter taking just 35 deliveries to get to the mark and appeared poised to produce a repeat of his legendary Cape Town innings here at the Wanderers. Unfortunately, Morkel did not let that happen as Stokes got a leading edge off a rising delivery angling into the middle and leg-stump, resulting in a simple return catch for the lanky pacer near the silly mid-off region.

The dismissal however, barely stopped Root from continuing to plunder the South African attack, as he kept timing the ball with perfection to send the ball all over the park while Jonny Bairstow played spectator at the other end. The elegant No. 4 batsman had barely crossed the 100-run mark when the match officials decided against continuing play on the second day.

Earlier in the day, South Africa resumed from their overnight score of 267 for the loss of seven wickets, with Chris Morris and Rabada batting on 26 and 20 respectively. The duo brought up the fifty-run stand between them, before James Anderson got the breakthrough with his first wicket of the innings, getting rid of Morris in the process.

It was ultimately was left to the last-wicket pair of Morkel and Viljoen to guide their side past the 300-run mark, with the pair hitting a few impressive strokes during this time. Bairstow missed out on a record seventh catch that would have seen him equal the all-time record for most catches, as well as dismissals, in a Test innings, currently jointly held by four former wicketkeepers (Wasim Bari, Bob Taylor, Ian Smith and Ridley Jacobs). Morkel was the last man dismissed, edging to Cook in the slips off Stokes’ bowling to depart for 12. 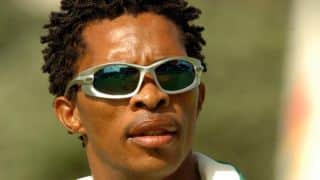 Makhaya Ntini: Ram Slam T20 match-fixing culprits are hurting themselves and their families