England made 575 for the loss of eight wickets declared.

All of England‘s players scored at a good rate in the second session of the second day, and they finally ended up with 575 for eight wickets declared at Tea against Sri Lanka in the first Test at Lord’s. Joe Root, who held the innings together went onto get a double-hundred. The first time he has made a double century in his short Test career. He also became the fourth youngest to score a double century. During the second session, he was well supported by the comeback man, Liam Plunkett. The seam/swing bowler can also bat a bit. He used the long handle to good effect and made 38, before getting out to Nuwan Pradeep.

However, the second day’s play was all about how well Root played. He kept the scorecard ticking and when needed he also played shots. It has to be said that Sri Lanka’s sloppy fielding didn’t help their cause. Once England declared, both James Anderson and Stuart Broad bowled well. Anderson even got a lbw decision against Dimuth Karunaratne in his favour. But it was overturned, as the batsman went for the review. England now will look to take early wickets and put Sri Lankan setup under pressure.

Earlier, England started on a sedate note with both Matt Prior and Root looking to play themselves in. Sri Lankan seamers looked to dig in a few short balls. It troubled both Root and Prior. Root got a top edge off Nuwan Pradeep‘s bowling  and Kaushal Silva deputising for Prasanna Jayawardene for a brief period couldn’t take what can go down only as a technical chance.

Eranga and Pradeep continued to bowl short pitch stuff. Eranga went around the wicket and did extract something from a good batting track. He eventually was rewarded with Prior fending off a  short delivery to the short-leg fielder, Silva. He also got Chris Jordan’s wicket. The No 8 batsman too was bounced out by the seamer. He was caught by Jayawardene, the wicketkeeper. Stuart Broad then, flayed Sri Lanka’s pace attack all over the park. He was finally out for 47. Root on the other hand, played his own game and now has 150 to his name.

In fact, England would he happy about the fact that they have crossed 400 runs after a longtime. The last time they did was back in March 2013 at Wellington against New Zealand. Since then, their batsmen have struggled for runs. Despite not compiling a century, it was a good day for Prior too. He became the third wicketkeeper from England to amass 4,000 runs in Tests for his country. 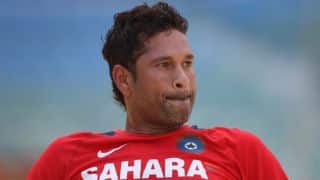