Joe Root’s splendid ton in the fifth One-Day International (ODI) came at a time when England were under scrutiny for their approach to the 50-over format. Skipper Alastair Cook has borne the brunt of a majority of the criticism, but Root also has had his critics. While he is recognized as one of the best young batsmen in the world, he isn’t exactly the most flamboyant with the willow in hand. Though he isn’t the fastest scorer, he can certainly add value to the England side with some solidity.

Root walked in at a time when England stared at another limbo-innings. They were two down quite early and were in danger of losing the plot yet again. But, Root started off in better fashion and was working the strike around. Unlike the previous game, he did not get bogged down and block his way through the innings; his strike-rate was a lot better this time around, and that helped England maintain a decent rate. Though they were hit by a few wickets and they slowed down, Root managed to chart a good recovery in company with Jos Buttler.

In the powerplay, it was a delight to see Root attack. He was ready to pounce on anything that was pitched a bit short by the spinners. The sixes over the leg-side were very well played and showed that Root was picking the ball early. A score of 294 is a good one for England, particularly after they struggled in the format this summer.

So where does Root go on from here? Though Cook will be scrutinized even further, Root should remain for he can strike that balance between aggression and caution. England have to utilize him well and ensure he can be their anchor. 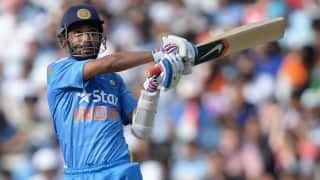 India vs England, 5th ODI at Headingley: Ajinkya Rahane out as India lose their first wicket