Alastair Cook and Joe Root looked more than comfortable to bat together and gradually took the score past 50, 100 and then 200 by the end of second session.

After bagging a couple of early wickets, West Indies failed to do more damage to England as the hosts go strong at the end of second session of the day-night Test at Edgbaston. Newbies Mark Stoneman and Tom Westley could not add much to England s scores as pace duo Kemar Roach and Miguel Cummins got rid of the two early on in the first session. However, Alastair Cook and Joe Root looked more than comfortable to bat together and gradually took the score past 50, 100 and then 200 by the end of second session. Root completed his hundred and is batting at 103 while Cook looks well set for his landmark, batting at 85.

Having built a partnership which added in excess of fifty runs in the first session itself, Cook and Root were brimming with confidence against a relatively inexperienced pace attack. The pressure of runs constrained the bowlers to experiment much and that resulted the batsmen to bat comfortably. The seamers failed to produce movement that could trouble the batsmen on a consistent basis, though Roach got some movement towards the end of the session. Coming from a fruitful series against tougher contenders South Africa, batting against West Indies pacers seemed like cakewalk for Root and Cook. Adding to that, the deliveries were bowled in their zone and as a result found their way to the ropes frequently. The spinners could not find much turn in the second session as well.

West Indies looked out of a certain plan to follow and the bowlers looked wayward. A more disciplined bowling is needed to combat a batting heavy England, who still have 8 wickets in hand and can take the score over 400 easily from this point.

Meanwhile, Root carried with his consistent run, scoring the 13th Test ton. He has been scoring half-centuries and centuries too often, making his presence on top dangerous for the opponents. Cook also is at his usual best to get his ton.

Getting a wicket and breaking the partnership has become priority for West Indies now, going into the third session. Their bowling is stronger than their current batting line-up and the bowlers will have to contribute with their bit to put up good contest. 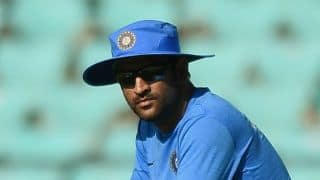