The allrounder, who was born in Barbados, will be England-qualified this month.

England‘s coach Trevor Bayliss has indicated that the uncapped allrounder Jofra Archer could make the team’s squad for a short home engagement against Pakistan.

The deadline for naming squads for the 2019 ICC Cricket World Cup is April 23, but are allowed to make changes before the tournament begins on May 30, and Bayliss has not ruled out the inclusion of the T20 sensation Archer. (READ: Archer could be the final piece of the jigsaw : Bayliss)

“We’d like it to be as close as it can be [to the final 15 in the Pakistan series] but we could try someone like Jofra in those matches and make a decision one way or another. The absolute final date [for the squad] is May 22,” Bayliss told Sky Sports. (READ: Archer could enhance England’s World Cup squad: Hussain)

“He’s a bowler you don’t get many of – someone who is able to bowl in all three phases of the game. He can take the new ball, bowl through the middle and bowl at the end, which is a good skill-set to have. There is plenty of speculation all the time in the papers and I’m sure [England’s other pace bowlers] read that. If we do leave someone out of that initial squad I’m sure that will be explained pretty well to them. It is something we’ve got to think about and that will be one of the decisions we have to make.

“Firstly, is [Archer] good enough to be in the team? And secondly, will that upset the apple cart to a degree that it affects the way we play?”

Archer, who will be eligible to play for England this month, has been a hot topic of discussion and despite having not played an ODI yet, he has been heavily talked about, with the likes of Ashley Giles and captain Eoin Morgan showing interest regarding his selection for the World Cup.

England play one ODI against Ireland and five versus Pakistan before the World Cup starts on May 30.

“Those matches against Pakistan and Ireland, I think he will get an opportunity to show us what he can do,” said Bayliss. “There was a little bit of contact made during the Australian summer, when there was talk about the date that he qualified, or how many days he needed to be back in the UK. He’s said publicly that he’s keen.

“There was certainly a discussion between selectors, coach and captain and that’s been ongoing for a little while. Now we’ve got the opportunity to have a look at someone like that, why not take it? We’ve got to have the squad in by April 23, but there’s a month after that to change it.”

Archer, who plays for Sussex, was born in Barbados but has an English father and a British passport. 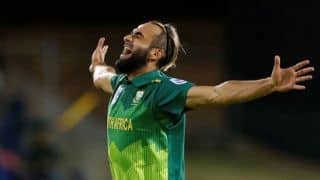