Archer regularly clocked over 90mph at Lord's, while rattling the Australian batsmen.

Michael Holding believes that we are witnessing a rare talent in Jofra Archer, one that “will change the entire outlook of fast bowling in the modern era”.

Following Archer’s strong Test debut for England in the second Ashes Test match at Lord’s, during which he clocked top speeds and rattled several of Australia’s batsman – including former skipper Steve Smith who was left concussed – the West Indian icon tipped the 24-year-old for success.

Having been overlooked for the four-day Test at Lord’s against Ireland last month, and then the opening Ashes Test at Edgbaston, Archer was included in the second match against Australia once James Anderson was ruled out. He made an immediate impact, clocking speeds in excess of 90mph regularly while serving up bouncers that caught Australia’s batsmen by surprise.

Archer finished his debut Test with match figures of 5/91 from 44 overs, three of which came on the last day as England pushed for a victory.

On Saturday, Archer struck Smith on the neck with a vicious lifter that forced the batsman off the field. Smith underwent a series of tests, which showed that the 30-year-old did not display signs of concussion. He allowed to continue his innings at the fall of the next wicket and added 12 runs to his score before being dismissed for 92.

(READ: Everyone stopped and the heart skipped a beat: Archer on hitting Smith)

On Sunday, when Smith displayed concussion symptoms, he was ruled out of the Lord’s Test. He was replaced by Marnus Labuschagne for the final day, in what is the first instance of a concussion substitute since the introduction of the rule.

Archer welcomed Labuschagne with a snorter and continued to test the Australians with his pace and bounce. That consistency and lethal ability to surprise batsmen, felt Holding, was potentially era-defining.

(READ: ‘Archer makes things happen when not many others in world cricket can’)

“Pace separates men from boys,” he said. “When you have someone with that sort of pace you find out who really wants to play. This man will change the entire outlook of fast bowling in the modern era.

“You see 85mph on the clock – not that I always look at that – but when you see 95mph you know what real pace is. Not a lot of batsmen will want to be going to bed knowing they are getting up the next morning to face that.”

Ben Stokes, Man of the Match in the drawn Lord’s Test, felt that Archer’s addition to the Test squad was a huge boost.

“It’s brilliant to have someone like that on your team,” he said. “He is a seriously exciting talent for us. You could see it in that first innings, when he bowled 29 overs and an eight-over spell of consistently 90mph plus – a frightening spell.

“I’d much rather have him on our side than anybody else’s. He has announced himself yet again, in a different format, and the sky is the limit for that kid.”

The third Ashes Test is in Leeds from August 22. The fourth Test is at Old Trafford from September 4 and the final fixture starts September 12 at The Oval. 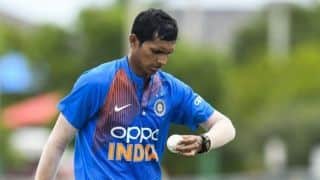