Archer took 6/45 as England bowled Australia out for 179 on day one at Headingley.

Michael Holding believes that tearaway fast bowler Jofra Archer has to be managed very appropriately by the England cricket setup, or else he runs the risk of serious injury on account of an ‘unsustainable’ workload that in his words amounts to ‘abuse’ of the 24-year-old’s body.

Following Archer’s strong Test debut for England in the second Ashes Test match at Lord’s last week during which he clocked top speeds and rattled several of Australia’s batsman including former skipper Steve Smith who was left concussed Holding had praised Archer for his ability to bowl serious pace and unsettle batsmen with short deliveries.

The West Indian icon has, however, expressed concerns of the amount of overs Archer is bowling. His reference point was the last day of the Lord’s Test, during which the debutant bowled 22 of the 75 overs sent down.

“Archer bowled a third of all the overs bowled. That’s a spinner’s quota,” he told The Independent. “If you keep bowling him like this you will lose the 96mph delivery. He’ll still bowl fast, 90mph, but do you want to lose the express pace? It is not just about this match or the next, but next year and the one after that.

“It’s abuse. When I was bowling, we had three other quicks just as fast. We could share the burden. England need to be very careful with Archer. He is obviously very fit, as you could see with his recovery from the side strain. Like me, he is tall, not big and muscular. He relies on rhythm and looks very relaxed running in. All that is in his favour but it is not sustainable for England to use him like this in every match.”

(READ: I don’t need to bowl 90 mph every spell to get wickets – Archer)

On day one of the third Ashes Test at Headingley, Archer stunned Australia with 6/45 to help bowl them out for 179. Playing his second Test, Archer was called back into the attack and sparked a collapse of eight wickets for 43 runs.

In his Sky Sports column, Holding lauded Archer’s skill and expressed satisfaction at the speeds generated.

“I am glad someone like him has come along, though, so that people recognise what real pace is! Not people bowling 83-84mph and thinking they are fast,” wrote Holding, who claimed 249 wickets from 60 Tests.

“What Jofra Archer is doing is real pace. Bowling 85mph is OK but people don’t charge down the pitch to fast bowling and all of those 84-85mph bowlers have had batsmen charging down the pitch at them. No one has done that to Archer and they won’t – they can’t!

“Everyone looks at Archer and says ‘he does it so easily’, nobody knows where the pace comes from, he looks so relaxed. It looks easy and relaxed but your body still goes through a lot of strain to bowl fast and people have got to appreciate that,” he wrote.

“England haven’t really used Archer in long spells in this game so far. At one point when 18 overs had been bowled, he’d bowled half but he hadn’t bowled all nine on the trot because of the various delays. What I am more worried about is that he bowled so many overs in the last Test match and then there were only three days in between that match and this one before he has to come out and try to repeat it. That is what I’m worried about.” 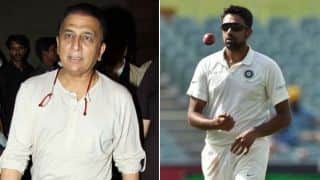