Woakes insisted that England would remain focused on the job at hand should Archer get a call-up.

Jofra Archer may be an exciting prospect but fast-tracking him into England‘s provisional ICC World Cup 2019 squad on Wednesday would not “be fair morally”, said fellow paceman Chris Woakes.

Barbados-born Archer described by England allrounder Ben Stokes as the most “naturally-gifted” bowler he has seen became eligible for England earlier this year.

The 24-year-old Sussex bowler whose father is English was the only high-level player to benefit when the England and Wales Cricket Board decided in November to alter residency rules.

Previously, players who entered the UK after turning 18 needed to live in the country for seven years to be eligible for England, but the ECB reduced that to three years. Archer arrived in 2015.

Woakes told BBC Sport that England, the top-ranked one-day-international team, have become close under captain Eoin Morgan as they prepared for the World Cup which gets underway in England at the end of May. “It probably wouldn’t be fair, morally, but at the same time it’s the nature of international sport,” said Woakes. (ALSO READ: Jofra Archer is a threat to Willey, Curran and Plunkett: Nasser Hussain)

“If he was to come in and someone was to miss out, it would be extremely unfortunate. We’ve been a tight-knit group for the last two to three years, played some really strong cricket, won a lot of series.

“I wouldn’t want to see any of my mates and team-mates miss out.”

But the allrounder insisted that England would remain focused on the job at hand should Archer get a call-up.

“I don’t think it would disrupt the team, because everyone would find a way to move on and we’re trying to win a World Cup for England. That’s the bigger picture,” added the 30-year-old. (ALSO READ: Jofra Archer is the most naturally gifted bowler I’ve seen: Ben Stokes)

Archer, who is playing in the Indian Premier League (IPL 2019) for the Rajasthan Royals, has appeared in just 14 one-day matches as a professional, but England coach Trevor Bayliss has said the allrounder will feature in the ODIs against Ireland and Pakistan in May. Other England pace bowlers have also expressed doubts.

David Willey said in March he did not know “whether someone should just walk in at the drop of a hat because they’re available”.

Mark Wood said last week that selecting Archer risked changing the “dynamic” of the side. 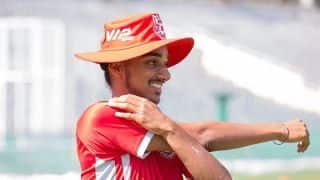