England suffered two crucial blows as they attempted to record their highest successful fourth-innings chase to win the first Test against Sri Lanka in Galle on Thursday. 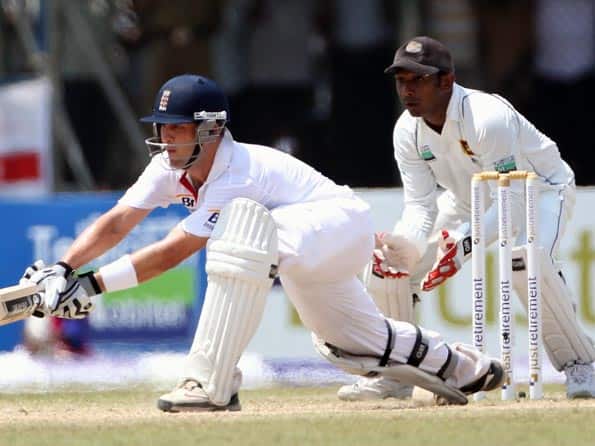 England suffered two crucial blows as they attempted to record their highest successful fourth-innings chase to win the first Test against Sri Lanka in Galle on Thursday.

The tourists, set a target of 340 to take the lead in the two-match series, stuttered to 177-4 by lunch on the fourth day at the Galle International Stadium.

Kevin Pietersen and Ian Bell were the batsmen dismissed in a tense morning session that ended with England still needing 163 more runs to win with six wickets in hand on a wearing pitch.

Jonathan Trott kept the world’s number one Test side afloat with a grim unbeaten 76 off 193 balls, after Rangana Herath failed to take a return catch when the batsman was on 62.

Wicket-keeper Matt Prior was the other batsman at the crease on 15.

England’s most successful fourth-innings chase came way back in 1928 when they made 332-7 to defeat Australia in Melbourne.

The tourists, who will slip to number two behind South Africa if they lose the series, lost Pietersen in the day’s third over after just seven runs had been added to the overnight score of 111-2.

Pietersen, on 30, attempted to on-drive spinner Suraj Randiv and only managed to spoon an easy catch to Sri Lankan captain Mahela Jayawardene at short mid-wicket.

The dismissal ended a valuable 70-run partnership for the third wicket with Trott after England had been reduced to 48-2 late on Wednesday afternoon.

Accurate Sri Lanka bowling tied down the tourists to just 34 runs from 15 overs in the first hour, 22 of them coming from the bat of Trott.

Bell, who top-scored with 52 in the first innings, missed a sweep shot off Herath and was given out leg-before by umpire Rod Tucker.

Bell immediately asked for a review, but he did not earn a reprieve from TV umpire Bruce Oxenford and England slipped to 152-4.

It was Herath’s third wicket in the innings after the left-arm spinner had bagged six in the first. (AFP)