Bairstow scored 387b runs in the Test series against Sri Lanka and jumped from the 36th position to the 18th, his career best rank.

England‘s wicket-keeper batsman Jonny Bairstow has a had a fairy-tale Test season with the bat in 2016. His 626 runs at an average of 104.33 in the six Test matches that he has played for England speak for themselves. The magnificent run-of-form has not only made him the highest run-getter in Tests in 2016, it has also helped him to climb from the 36th position to the 18th in the ICC Test rankings for batsman. It is also the first time Bairstow has entered the Top 20 in his career. With scores of 140, 48, 167 and 32 in the four innings that he batted in against Sri Lanka in the 3-Test series, that his side won 2-0, Bairstow has announced his arrival in the international arena in some fashion. ALSO READ: Jonny Bairstow overtakes Alec Stewart

Bairstow managed to score 387 runs in the series, although his teammate Joe Root wasn’t at his best and therefore slipped to the 4th position. Root’s highest score was 80, which he managed to get in the first innings of the second Test at Chester-le-Street. ALSO READ: Jason Gillespie: Jonny Bairstow can do similar job for England that Adam Gilchrist did for Australia

Meanwhile, Australia’s Steve Smith continues to hold the No.1 position in the list. He is followed by New Zealand batsman Kane Williamson and South Africa’s Hashim Amla.

In the list of Test bowlers James Anderson tops the chart after an impressive against Sri Lanka. India off-spinner Ravichandran Ashwin occupies the second spot. Anderson’s teammate Stuart Broad is then placed at No.3. Ravindra Jadeja is the second Indian in the list and is placed at No.6.

Australia retain the No. 1 spot in the top Test teams list. India are at third, followed by Pakistan and England. 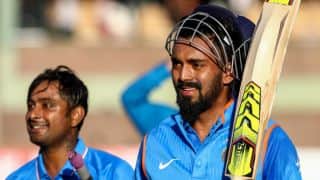