"We will take confidence from that into the Test team but at the same time it's something that we know with Test cricket is completely different."

England will go confident into the test series after winning the ODI series against India by 2-1. This was England’s eight consecutive win in ODIs, however their form with the red ball hasn’t been that well. They have lost their last three Test series with only one win to their name.

“The group of players have been together and building. You look back three years ago and people were saying the same things about that. You can read into it as much as you like, but I can tell you when we step on the field at Edgbaston there’ll be a lot of excitement, passion and hunger to go out and win.”

Whereas on the other side, India’s Test form has been good in recent years. It may have lost the series in South Africa but gave a tough fight. The Indian bowlers did a great job there bowling the host out in every innings of all three matches. Talking on that Bairstow is confident of England carrying confidence from ODI victory.

“Playing against the number two side in the world when you’re ranked at one there’s always pressure on it and to win that series was something we set out to do. We will take confidence from that into the Test team but at the same time it’s something that we know with Test cricket is completely different. It’s a different formula, a different game and different personnel within the team.”

The big positive for the host will be the return of form for Joe Root. Root smashed two centuries in the ODI series guiding his team to victory. He made news when he did the mic-drop celebration after winning the last ODI at Headingley.

“I know he’s copped a lot of stick for it,” laughed Bairstow. “I don’t think that’ll be coming out anytime soon! It was good fun and he deserved to get man of the series the way that he went out and guided us through, especially at Headingley. Hopefully he goes out and keeps scoring the runs that he’s scored in the last two games.” 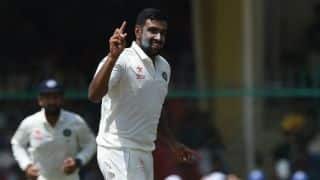