The Ashes has already been decided with Australia taking the first three Tests, but England is scrambling to avoid an embarrassing 5-0 series whitewash.

The Ashes has already been decided with Australia taking the first three Tests, but England is scrambling to avoid an embarrassing 5-0 series whitewash.

Bairstow said captain Root was coping with the growing pressure and the England team was working hard to break their run of outs against the Australians in the fourth Test, starting at the Melbourne Cricket Ground on Tuesday.

“We don’t just owe him (Root), we owe ourselves as well,” Bairstow told reporters.

“It’s something that you don’t come away and work as hard as we work to get nothing out of at all.

“So without doubt in these next two games it’s a case of, in our eyes, a two-Test series now and that’s exactly how we’ve got to look at it.

“We’ve got to go out there and try and win both of these Test matches.”

Root has been in the firing line leading a disastrous England tour and has been blasted by former Australia captain Ricky Ponting as looking like a “little boy” who has been a “bit soft” during the Ashes defeat.

Ponting senses Root is struggling to command the respect a leader needs, and suggests that has been demonstrated by some of England’s off-field controversies.

“Those things show a complete lack of respect for him as captain,” Ponting told reporters.

“To be honest, I think he has been under pressure right from the start because of things that have been happening off the field.”

Bairstow “headbutted” Australia’s Cameron Bancroft in a bar in October, while this month England Lions batsman Ben Duckett was suspended for pouring a drink over England bowler James Anderson.

Ponting said England need Root to “step up big time” and criticised him for being “too shy” in his post-match news conferences.

“The way he answered a lot of the questions after the game last week seemed almost like a little boy,” said Ponting.

“You need to be more than that as a leader, especially when things aren’t going well. It just looks like it has been a little bit soft.”

Despite Root winning all three tosses, Australia won by 10 wickets in Brisbane, 120 runs in Adelaide and an innings and 41 runs in Perth.

“They have been completely blown away. Unless you can find some drastic ways to get better, I’m not sure how they are going to improve,” Ponting said.

Ponting said Root’s batting — he has scored only 176 runs at 29.33 — was showing the effects of leading a beaten team.

“Look at some of the shots he’s played. It looks as though something is playing on his mind a little bit,” Ponting said.

“They are not the shots you would expect from one of the best players in the world, and certainly not someone trying to lead from the front.”

Paceman Tom Curran and leg-spinner Mason Crane are in line to debut for England in Melbourne, with fast bowler Craig Overton in doubt with a cracked rib. 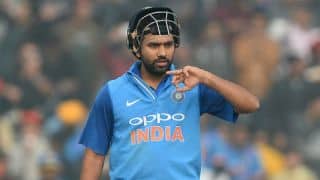