England‘s Jos Buttler became second wicketkeeper to achieve the feat of pouching 100 dismissals in One-Day International Cricket (ODI). Former wicketkeeper-batsman Alec Stewart leads the chart with 163 dismissal to his name. Meanwhile, Buttler has now 101 dismissals in just 72 matches. Given Buttler is just 25 years old and has a long way to go, he will go on to achieve something any English wicketkeeper could not attain. In the third ODI against Sri Lanka, Buttler took catches of Kusal Perere and and Sri Lanka captain Angelo Mathews. However, the match was abandoned due to rain as England lead series 2-0. Full Cricket Scorecard: England vs Sri Lanka 2016, 3rd ODI at Bristol

England captain Eoin Morgan won the toss and elected to bowl first on a wicket that offered some swing for the pacers. And, as expected, the islanders lost two wickets in the mandatory powerplay, courtesy Liam Plunkett and David Willey’s spectacular bowling. However, Kusal Mendis and Dinesh Chandimal steadied the sinking ship and kept the scoreboard ticking. Later, Chandimal and Mathews stitched up a stunning 80-run partnership and put the hosts on the back foot. Chandimal scored his second consecutive half-century, which was studded with 5 fours and a six. Mathews, on the other hand, continued his commanding show, and pasted 3 fours and a six. Read: England vs Sri Lanka 2016, 3rd ODI: Match Abandoned as ENG lead 1-0

In the death overs, it was Upul Tharanga yet again in thick of action, scoring a vital 40-run knock to help Sri Lanka post 248. During the chase, last match’s hero Alex Hales was dismissed on a duck by Suranga Lakmal. Nonetheless, the match was abandoned due to persistent rain, with England leading series 2-0. 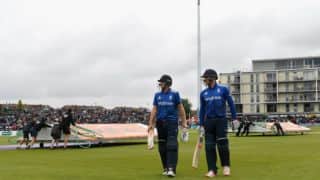