Jos Buttler refused to put a limit on his rapid run-scoring as hosts England go in search of a first men's World Cup title.

Jos Buttler refused to put a limit on his rapid run-scoring as hosts England go in search of a first men’s World Cup title.

Despite appearing in every World Cup since the inaugural edition in 1975, England have never lifted the trophy, with the last of their three losing appearances in the final back in 1992.

But hopes are high that 2019 may finally be their year, with key batsman Buttler coming into form ahead of England’s tournament opener against South Africa at The Oval on May 30 courtesy of a stunning century in a 12-run win over Pakistan in the second one-day international at Southampton on Saturday.

The 28-year-old went to three figures in just 50 balls, celebrating the landmark with a baby-rocking gesture as wife Louise and new daughter Georgia looked on from the stands.

Only Buttler himself, with a 46-ball effort against Pakistan in November 2015, has scored a quicker ODI hundred for England. But the 28-year-old, who has five of England quickest 10 ODI hundreds to his credit, believes a new national record could be within his reach.

“Absolutely,” he said following his match-winning 110 not out against Pakistan. “When the opportunities arise, it gives you lots of confidence. We’ve seen other guys around the world show it’s possible.”

Buttler, England’s one-day wicket-keeper, has also made his mark in global franchise tournaments such as the Twenty20 Indian Premier League and Australia’s Big Bash League.

“In the last few years, I’ve had some brilliant experiences. A couple more years older and worked things out a bit better, managing to drip-feed them into my game really well. I’m really chasing that consistency and want to perform every day. That’s been a big part of the last few years to try and be more consistent,” he said.

While Buttler’s World Cup place is assured barring injury, the same cannot be said for several of England’s bowlers with the arrival of recently qualified Sussex quick Jofra Archer turning the five-match Pakistan series into something of a ‘bowl-out’.

England are due to announced their 15-man squad for the World Cup at Lord’s on May 21, with white-ball captain Eoin Morgan relishing the competition for places. “I think they are all pushing each other,” said Morgan ahead of Tuesday’s third ODI in Bristol. “It’s a bit like our batting unit the last two or three years. Guys have come in and done well. And guys will miss out.”

Archer’s arrival on the England scene has turned the spotlight on the likes of fellow quick bowlers Liam Plunkett and David Willey. With Archer rested at Southampton, left-armer Willey took two important wickets in a fine return of two for 57 in his maximum 10 overs, with Plunkett returning figures of two for 64. 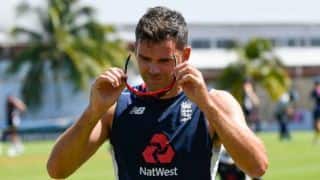