Buttler has become the toast of his nation after scoring the fastest ODI century by an Englishman.

Jos Buttler believes he will eventually be able to transfer his stunning one-day form into the Test arena but that now is not the time for him to make a debut in the five-day format. The 23-year-old wicketkeeper-batsman, who joined Lancashire from Somerset at the start of this season, played one of the greatest limited overs innings ever by an England batsman, albeit in a losing cause, against Sri Lanka at Lord’s on Saturday.

Coming in with England in dire straits at 111 for five in pursuit of a target of 301, Buttler made 121 with his hundred coming off just 61 balls — the quickest by an England player at One-Day International (OD) level and the fastest by any batsman in England. Unfortunately for England, Buttler was out in the final over as Sri Lanka won by seven runs to square the series at 2-2 ahead of Tuesday’s finale at Edgbaston.

England are due to name their squad for this month’s first Test against Sri Lanka on Thursday, with their apparent plan to recall Matt Prior after he was dropped during the 5-0 Ashes thrashing in Australia set to be scuppered by the Sussex stumper’s Achilles injury.

While Buttler certainly hasn’t done his chances of making a Test debut any harm, doubts remain over the quality of his glovework and there have even been suggestions England could recall Essex’s James Foster, reckoned to be the best keeper on the county circuit, 12 years after the Essex stalwart played his last Test.

England captain Alastair Cook has indicated Buttler may need more time to hone his craft and the player himself agreed. “I haven’t discussed it with the management or Alastair,” Buttler said. “(But) I am not ready for Test match cricket. “It is a pretty easy assumption to make, looking at my game and where I am as a player.

‘I want to Improve my glovework’ “That is my honest opinion, and that is the opinion of others.”

However, he added: “It is my hope and ambition to turn into someone who is talked about as a Test cricketer as quickly as I can.”I average 32 in first-class cricket — and if I wasn’t playing one-day cricket, I would not be at the forefront of anyone’s mind with an average like that.

“My glovework needs to improve too, to be a Test match cricketer.” Having competed for the keeper’s spot at Somerset with Craig Kieswetter, Buttler felt obliged to leave his native county.

“I made the change to Lancashire to improve my wicketkeeping, and do it full time. “You have to remember it takes time. You can’t be a finished article at 23. “You want to accelerate your development, but you want to be realistic as well.

“I am getting better. This is probably the best start I have had to a first-class season. I am starting to learn my method in four-day cricket.”

But whatever happens in the immediate future, Buttler could well have the chance to discuss what it’s like to play Test cricket with Andrew Flintoff after Lancashire announced last week they were recalling the 2005 Ashes hero to their Twenty20 squad five years after the all-rounder’s injury-induced retirement.

Flintoff is now in line to make a much anticipated comeback against Yorkshire at Old Trafford on Friday. “He has got to get in the team (first), I guess,” said Buttler. 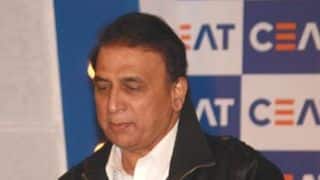 CEAT Cricket Ratings Awards to be held on Monday, June 2