The England wicketkeeper averages 15.25 in eight innings in this season's Ashes.

Jos Buttler had combined with Alastair Cook to defy Australia’s bowling attack for more than 25 overs on the third day at The Oval, but he was dismissed before he could get to his half-century the next day. He mistimed Mitchell Marsh to mid-off for 42, to give Australia their eighth wicket, with more than 100 still needed to be scored to make them bat again. His vigil for a significant portion alongside Cook had him curbing his attacking instincts to possess a strike-rate of 39.25. His knock was the second-best for England in the match behind Cook’s 85. Australia have dominated the hosts in this final contest and are well on their way towards their second win in this season’s Ashes. LIVE CRICKET SCORECARD: England vs Australia, 5th Test, The Oval, Day 4

Buttler arrived to bat in the 52nd over, following Ben Stokes’ dismissal via an edge off off-spinner Nathan Lyon. He buckled down to leave balls, defend, push and nudge, signalling the intent to defy rather than counterattack the way he is known to do in limited-overs matches.

In the first innings, Buttler was bowled out for 1 by Lyon, as England were wiped out for 149. He has had a mediocre series as a batsman in the series, with 122 runs in eight innings at 15.25. He has been England’s wicketkeeper of choice following the fading out of Matt Prior. He is known for his attacking batting in other formats of the game, a quality he showed last year with a century against Sri Lanka to turn a contest around, but that match was lost. Cook, however, reckoned then that Buttler was not yet ready to play Tests, but within weeks he was drafted into the Test line-up to make his debut. LIVE CRICKET UPDATES: England vs Australia, 5th Test, The Oval, Day 4 POLL: Has Ashes 2015 been the least competitive Ashes yet? 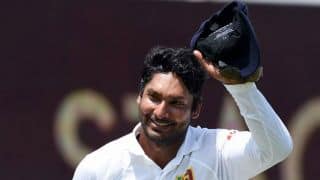