Jos Buttler was picked for the Southampton Test with Matt Prior withdrawing due to injury. He does face the challenge of replacing Prior, who has had a successful career, but he has shown a glimpse of his talent in his maiden outing. Nishad Pai Vaidya writes about Buttler’s initiation in the white flannels.

There were a lot of expectations when young Jos Buttler was called up to the Test squad. The hard-hitting wicketkeeper batsman’s reputation is on the rise in international cricket and he has marked his Test debut with a brilliant innings of 85. Though there wasn’t much pressure given the fact that England had piled on the runs with Ian Bell scoring a ton, Buttler still had to deal with a few nerves in his maiden outing. But, he has handled it beautifully and made good use of the batting track.

In a line-up where most batsmen play the conventional way and back their scores with character rather than exuberant flair, Buttler is one who brings in a breath of fresh air. Kevin Pietersen was one man who added excitement to this line-up and with him gone, it is Buttler who makes up for it. There is that panache and arrogance in his strokeplay; in one-day cricket he walks across his stumps and plays across the line. Though he had to be more conservative in Tests, he heeded to his captain’s advice and followed his natural instincts.

This year, he made a mark with the fastest One-Day International (ODI) ton against Sri Lanka, in a game that England nearly won. Since that innings, calls for his inclusion grew louder with Matt Prior struggling for form. Buttler comes in at a time when England are in a precarious spot. Prior has donned the gloves through their successful period, and batted with freedom down the order. In Buttler, they have found a successor who can bat with more aggression. It is only that he has to match Prior’s consistency over a long period of time.

It is interesting that the last three England wicketkeepers to make their Test debuts have marked their entry with good scores. Prior announced himself with a ton on debut against West Indies in 2007. Tim Ambrose had a successful maiden series in New Zealand. Buttler too can add his name to that list. 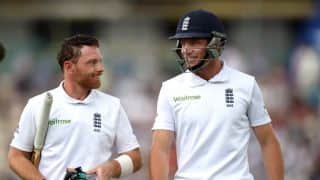