Displaying stellar all-round performance against Afghanistan in the fourth ODI of the Dubai triangular series, Josh Davey scored a bold fifty before coming back to take six wickets, helping Scotland to a monumental 150-run win.

Scotland who elected to bat first, were reeling at 108 for six before Davey joined hands with Berrington to put up a 99 run partnership before Berrington got out on 62. Davey then made his way to an unbeaten 53 off 48 balls taking Scotland to 213. Afghanistan openers came out all guns blazing with the openers putting up 38 in six overs.

But from there everything fell apart with Davey sending the openers back to the hut. From there Afghanistan fell apart like shattered glass. Davey continued to pick regular wickets and ended up with six-wicket haul. He was well assisted by Ian Wardlaw who took the remainder of the wickets. It was thus only the fourth instance of two bowlers taking all the wickets in an innings.

The next match in the series is between Ireland and Afghanistan. After being humiliated by Scotland in such a brutal fashion, Afghanistan may find it difficult to make a comeback.

Catch the full scorecard of the match here 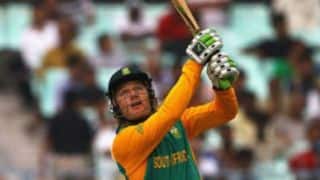