Josh Hazlewood recorded figures of 5 for 68 in the 1st innings of his debut Test.

Impressed with Josh Hazlewood‘s performance during his five-wicket haul on Test debut, Australian pace legend Glenn McGrath today said that the New South Wales seamer can become a member of the 200-wicket club if he continues the good work.

Sharing the new ball with Mitchell Johnson, Hazlewood inspired Australia‘s fighback as India lost their last six wickets for just 97 runs to be bowled out for 408.

McGrath, who presented Hazlewood with his baggy green cap yesterday, is expecting a long and successful career for the giant fast bowler.

“Without a doubt, now it’s up to him,” McGrath, who has taken more Test wickets – 563 scalps in 124 Tests – than any other Australian fast bowler, told Fairfax Media.

“If he continues working hard off the field, improving his game, getting fitter and stronger all the time and never being happy with where he is, he’ll get 200 easy.”

Hazlewood, 23, became the 33rd Australian to take a five-for on Test debut and 16th to do so in his debut innings, emulating the deeds of former greats Dennis Lillee, Brett Lee and Graham McKenzie. Only 10 Australian quicks have reached the milestone but McGrath believes the boy from Bendemeer has what it takes to join some of the greats of the game.

“He bowls good areas, bowls a heavy ball, gets bounce on any tracks. He’s going to be good,” McGrath said.

“He’s going to be quality. He’s got good control. He may not be quite as quick as Cummins or Pattinson or as in your face aggressive as Patto is, but he’ll put pressure on you the whole time.

“He won’t give you easy runs. He’s prepared to work hard. It’ll be hard work scoring runs off him but he’s going to take wickets.” 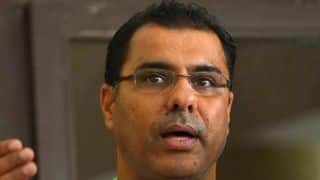 Pakistan vs New Zealand 2014: ODI series win will be major boost for hosts ahead of World Cup, feels Waqar Younis