Hazlewood dismissed Jason Holder, Marlon Samuels and Dwayne Bravo in the fourth over of the second innings.

Josh Hazlewood claimed a hat-trick during the warm-up match of ICC World T20 2016 against West Indies at Eden Gardens on Sunday. Hazlewood dismissed Jason Holder, Marlon Samuels and Dwayne Bravo in the fourth over of the second innings. It was Hazlewood’s second over of the match. After the dismissal of Bravo, Dinesh Ramdin joined Charles at the crease. Steven Smith and spinner Adam Zampa made the next two breakthroughs for Australia. While Smith removed, Charles, Zampa sent Ramdin back to the pavilion. Australia won the toss and had elected to bat first. They posted a total of 161 in 20 overs. In reply, West Indies began their chase with Holder and Johnson Charles opening the batting. Shane Watson top-scored for Australia with 60 off 39. LIVE CRICKET SCORECARD: Australia vs West Indies, ICC World T20 2016, warm-up match at Eden Gardens, Kolkata

The other major contributions with the bat were made by Aaron Finch and Steven Smith who scored a quick 33 and 36 respectively. Barring them, the only other batsman who scored in a double digit was John Hastings who managed a six-ball 10 towards the end after the middle-order collapsed. The likes of Usman Khawaja, Glenn Maxwell, Mitchell Marsh and Peter Nevill were dismissed cheaply.

Dwayne Bravo was the pick of the bowlers for West Indies who bagged 4 wickets, giving 21 runs in his spell of 4 overs. This is West Indies’ second warm-up match after getting thrashed at the hands of India. The match was played at the iconic Eden Gardens and West Indies lost by 45 runs. Once again Rohit Sharma had entertained the Kolkata crowd but eventually fell short of two runs for a superb century. 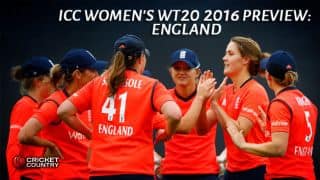