Considering the progress Hazlewood has made, he is on the fast track to his return into the national side.

It s been almost seven months that fast bowler Josh Hazlewood last played for Australia. The 27-year-old fast bowlers last game for Australia was the fourth Test against South Africa in March, after which a back injury has prevented him from being part of the ODI tour of England and kept him out of action from the T20 series in Zimbabwe and the ongoing Test and T20 series against Pakistan.

However, considering the progress Hazlewood has made and the efficiency with which his workload has been managed, he is on the fast track to his return into the national side. Australia host South Africa for three ODIs and three T20Is, and Hazlewood is likely to be fit in time to resume his international duties. That said, he will slot back into a different team composition, for Australia have ushered into a new era since bans were imposed on regulars Steve Smith and David Warner.

“It s still playing the Australian way with pretty aggressive cricket and it s just about tinkering with a few things here and there on and off the field,” Hazlewood said. “I think we ve got a great group moving forward and there are a few spots still open moving forward, so whoever gets those and puts their hands up deserves them, and we ll have a form team going into the first Test.

“There s a few that have come in in the UAE and there could well be some [more debuts] in the Australian summer. The bowling is pretty much settled, we know each other s roles pretty well. It s just about getting those batters in and I m sure whoever they pick will do a great job.”

Hazlewood believes that although the Australian bowling line-up has tasted success at home, their real test will be performing abroad. In Hazlewood and Pat Cummins absence due to injuries and doubts prevailing over Mitchell Starc s fitness, Australia have gone to the likes of Billy Stanlake and Andrew Tye in limited-overs, while offspinner Nathan Lyon has set the Test area on fire.

“There s a few good attacks out there. South Africa and England in their own environment are very good attacks, and even India in their own environment,” Hazlewood said. “Everyone knows their conditions and bowls to their conditions very well, it s about performing away from home and really dominating all surfaces. Then you can call yourselves the best.”

Taking one step at a time has been key to Hazlewood s road to recovery. He s had reasonable outings in the Australian domestic circuit playing the Futures League for New South Wales and plans of following a proper plan of action to regain full fitness. With the four-Test series against India approaching, Hazlewood will be expected to be part of Australia s bowling attack.

“Obviously I ll increase the workload as the summer goes on but everything feels in a pretty good place. The back feels really good, now it s just about playing some cricket,” Hazlewood said. “It s good to have a good hit-out and 20-odd overs each week. This is obviously a pretty good wicket to bat on so it was hard work, but I probably needed it so it was good.

“I reckon the group was really good, some good blokes in there. They play a lot of cricket together, they re a tight unit, some of them live together. It was a good environment and they ve won a couple on the trot, hopefully they keep winning and have a good year.” 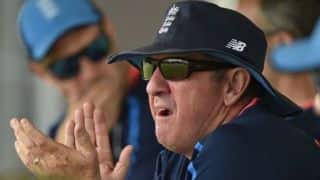