Josh Hazlewood has said that he is thriving on the extra responsibility placed on his shoulder in the ongoing series against West Indies.

Melbourne: Australian pace spearhead Josh Hazlewood has said that he is thriving on the extra responsibility placed on his shoulder in the ongoing series against West Indies after the absence of Mitchell Starc due to an ankle injury. 24-year-old Hazlewood, who bagged 51 Test wickets in 2015, admitted that he was jubilant with the opportunity to lead the bowling unit in the Windies tour, News.com.au reported. Reflecting on his successful year, Hazlewood said that he was extremely happy with his performance and insisted that he had become very consistent again. FULL CRICKET SCORECARD: Australia vs West Indies 2015-16, 2nd Test at Melbourne

Hazlewood, who had recently been named as the ICC’s Emerging Cricketer of the Year, affirmed that he was quite thrilled to receive the award, adding that he hopes his achievement would lead him towards something better. Earlier, West Indies had suffered an innings and 212-run defeat at the hands of Australia in the first Test in Hobart. With the defeat, the Caribbean side are currently trailing 0-1 in the three-match series and will play their second match on the Boxing Day in Melbourne followed by the third Test in Sydney. Josh Hazlewood, Adam Voges rise in ICC Test rankings following outstanding performances vs West Indies in Hobart Test

Earlier, the ICC Player Rankings for Test Batsmen and bowlers were released after the Dunedin and Hobart Tests. As for the ICC Player Ranking for Test Bowlers, Josh Hazelwood’s seven wickets against West Indies helped him secure the 10th rank, while his off spinner Nathan Lyon has risen two spots as the 15th rank with three wickets in Hobart. New Zealand’s Trent Boult four wickets against Sri Lanka help him remain at the sixth rank, making him the top six bowlers. 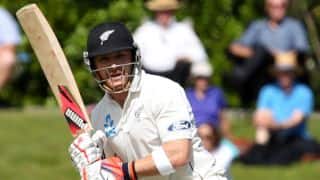