Devon Smith s maiden ODI century, a career-best knock from Kieron Pollard, and seven wickets between Suleiman Benn and Darren Sammy were the highlights for West Indies as they defeated Ireland by 44 runs. 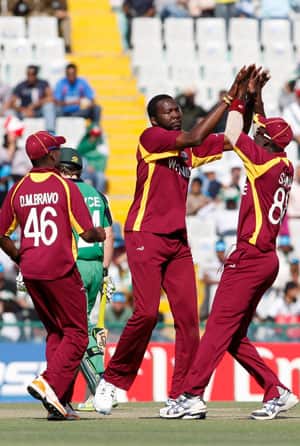 Devon Smith s maiden ODI century, a career-best knock from Kieron Pollard, and seven wickets between Suleiman Benn and Darren Sammy were the highlights for West Indies as they defeated Ireland by 44 runs. Ed Joyce s 84 and a busy innings from Gary Wilson have West Indies a scare, but needing to overhaul 276, Ireland fell a fair way short.

That they were left to get so much owed much to Pollard, who entered the stage with West Indies run rate hovering at four an over and injected the necessary oomph to leave Ireland chase at a required rate of 5.52.

Ireland lost Paul Stirling in an eventful start to their chase, his dismissal to Benn sandwiched between three thumped boundaries in the second over. Joyce played his most fluent innings of the tournament, cracking boundaries off his first two deliveries and then lacing two more off Kemar Roach and Benn. Two fours to William Porterfield in the fifth over saw Roach swapped for the debutant Andre Russell, who bowled a tidy if unthreatening opening spell (6-0-24-0).

Together will Niall O Brien, who came in after Sammy ended Porterfield s torturous innings, Joyce stitched together a 44-run stand. Joyce opened the face of the bat and drove confidently through the line, forcing the ball through the square field on the off side with precision. Niall O Brien s wicket, bowled by Benn 25, was followed by Wilson helping add 91 for the fourth wicket, seemingly without taking risks.

Wilson was acutely aware of which bowlers needed to be targeted, and also pushed Joyce for doubles. Roach was played out, Pollard taken for two fours in his first over, and Nikita Miller offset by lovely use of the feet and the crease. Joyce enjoyed a life on 65 when Miller put down a simple return catch, and rubbed it in by spanking the bowler for four. Wilson too looked to cash in on Miller, and slogged him for six before twice reverse-paddled for fours.

With a century on the cards, Joyce had his stumps splayed by an excellent ball from Russell.

That prompted Sammy to take the ball, and in successive overs he picked up Kevin O Brien and Wilson. Wilson wasn t eager to go anywhere, having seen his lbw verdict on the big screen, and sought to clarify with the umpire Asoka de Silva because replays clearly showed that Wilson had pushed outside the line and got the pad outside the line. The remaining dismissals were more clear-cut, and West Indies clung on for a comfortable win.

When Porterfield won the toss, he had little hesitation in choosing to put West Indies in. That Chris Gayle had been ruled out with an abdominal strain did not help West Indies. They started their innings well, with an 89-run opening partnership, but looked uneasy, as if unsure how to deal with the slow track.

The first boundary was scored in the fourth over, and after ten overs they had managed only four in total as the score meandered to 28 for zero. An opportunity was presented when Smith drove Alex Cusack hard to short extra cover, but Stirling was unable to grab a sharp chance.

In conditions not easy for batting it around a little with the new ball, and there some plays-and-misses Smith overcame his jitters and played close to the body, choosing the deliveries to attack. It was an innings of much value and there were genuine shots of class, the pick of the lot a back-foot punch through cover and a lofted six over mid-on before he d crossed fifty.

From 89 for no loss, West Indies slipped to 103 for three in 32 overs. What followed was marked change in rhythm, with Smith lifting his game and Pollard sizzling. Until now Smith had some struggles forcing the pace, but Pollard s hulking presence prompted him to shrug it off in the batting Powerplay. With Pollard setting the tone with some meaty drives, the pair managed to keep the scoreboard ticking.

Upping the tempo with some glorious pull shots, Pollard raised West Indies 200 in the 41st over with a clever dab for four before bringing up his third ODI fifty with a hack to deep midwicket. With a clatter of fours and sixes Pollard surged to 94 off 55 balls, with 64 runs hammered through the on side. He fell six short of a century, but the job had been done.

Man of the Match: Kieren Pollard